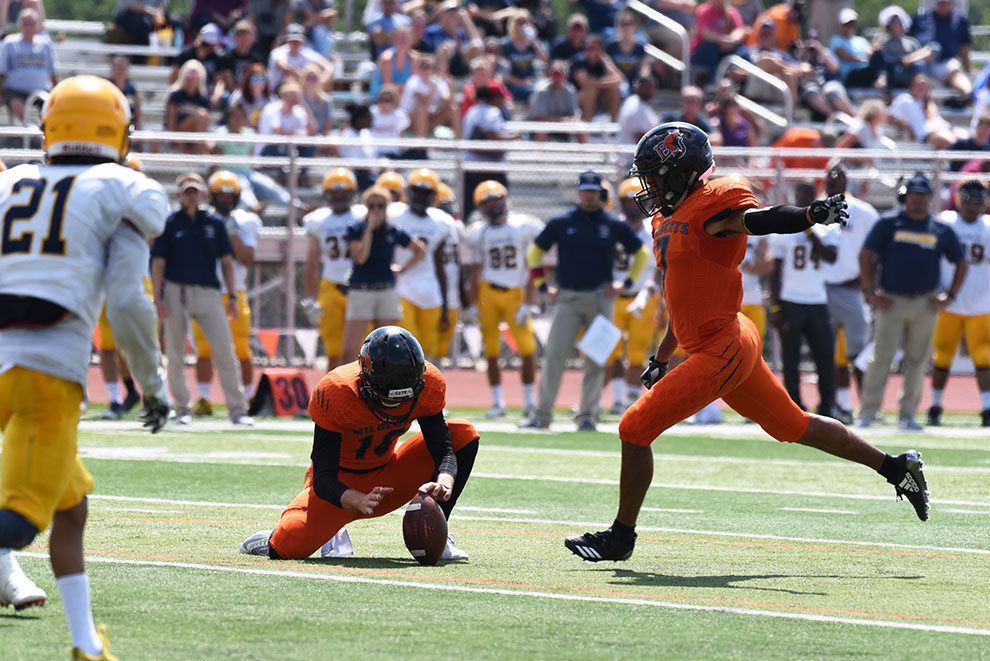 Clarence Clark became the NAIA's All Time Leading Scorer on Aug. 26 vs William Penn. Clark currently has 526 points and counting as he continues his senior season.

Clark’s passion for football comes second to his childhood love for soccer. Clark was able to find success as a kid in the sport long before he was opened up to football, which would eventually lead him to Kansas and Baker University to play football.

While growing up in Phoenix, Arizona, Clark’s parents threw him into a variety of sports to see what he was interested in. As a kid, Clark tried everything from tennis to swimming; one of the only sports he didn’t attempt was hockey, mostly due to the skating.

Clark’s father first signed him up to play soccer in the third grade, but it wasn’t until Clark’s parents didn’t sign him up for soccer the next year that he realized how much he wanted to play.

“Everybody was all getting ready for soccer and I didn’t get to go and was like hang on I kind of like doing that,” Clark said. “So then I cried, complained and did whatever and they signed me up for soccer ever since.”

Clark gives credit to his parents for first signing him up for soccer. Clark believes it was an easy way to keep him occupied and he ended up enjoying the sport the best. Soccer became Clark’s main focus and never once as a kid did he think about football, whether it be flag or tackle.

Since beginning soccer in third grade, Clark continued to play through his senior year of high school and even went back after his first year at Baker to compete in the State Cup in the summer.

Clark began playing with the city team before wanting to pursue a more competitive atmosphere. He then spent the next ten years on a club team until the start of high school. It wasn’t until his freshman year of high school that Clark began his football career.

Clark was able to play both football and soccer in high school due to the way sports seasons are set up in Arizona. Soccer is played in the winter while football is in the fall.

During his high school days, Clark recalls going straight from football practice to soccer practice, changing in the car while his dad drove.

Clark’s passion for soccer continued when he began searching for colleges. With accolades such as Arizona Player of the Year his senior year and being captain of his club team, Clark continued his focus on soccer while still playing football.

Clark’s believes his experience with soccer ended up helping with his football career.  He says getting used to running in soccer allowed him to adjust to being a receiver for the football team.

With soccer, college recruiters looked for potential players much earlier than football. During his senior year, Clark began talking to Division 1 schools, however many schools would have preferred juniors.

“I got recruited really heavy my senior year once they started to notice me,” Clark said. “But it just wasn’t working out, they were talking to me about walking on and earning my scholarship.”

Clark knew he would be able to play with anyone and was never worried about the competition. Instead, Clark focused on the money he could get for scholarship and with the help of a family member that opened up the possibility to try for a football scholarship Clark’s senior year.

At the time, Benedictine College was already recruiting Clark, so Clark was interested in Kansas colleges and decided to check out the Benedictine rival Baker University.

“I came out here and visited Benedictine and then my uncle picked me up and we came here [Baker] and it’s pretty much history after that,” Clark said.

That history for Clark has also become history for the Baker football team, something coach Grossner says could be here for a very long time.

In his first game his senior season this year, Clark broke the record for the NAIA all-time leading scorer.

“To be the all-time leading scorer is unbelievable,” Grossner said. “And he did it the very first game of his senior year. That’s a career I doubt will ever be broken.”

While the career records increase over the span on Clark’s season, his mentality in every game remains the same.

“My mindset is the same now as it was when I was a freshman,” Clark said. “Get on the field, if I get to go on the field and do my job, make a catch here, a kick here, or a block here.”

While Clark has found success in a sport he wasn’t expecting, he stills thinks about what life would be like if he would’ve continued running on the field with a different sport and a different team.

While Clark says the opportunity to join the Baker soccer team has always been open, he doesn’t think he would have played at the NAIA level. Clark’s team from high school included a lot of players that went to Division 1 schools and Clark believes he could have followed.

While his passion for soccer hasn’t stopped, Clark has found a new passion with football, something to be seen at both Baker football games and on the football records.