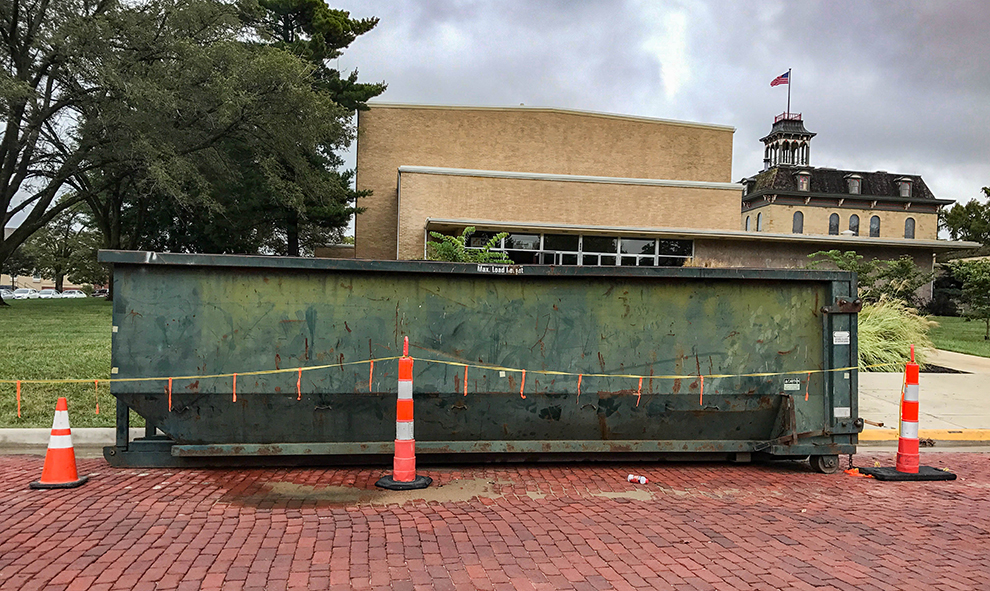 A dumpster sits in front of Rice Auditorium as renovations are still under way. It is expected to be completed in time for Fall Commencement this Dec.

Rice Auditorium has been under construction since the end of July, receiving new upgrades for the school year. The building has not been renovated since 1993, and some crucial parts were still original to the building, which was constructed in 1955. One major change is the addition of new seating.

“The seats were the original seats and that’s one of the main concerns,” Associate Professor of Theatre Tom Heiman said. “It was so dated.”

In addition to new seats, Rice Auditorium is gaining a new light board and another office space.

“Patti Heiman, the production manager, will be getting her own office. She is actually using part of the ladies’ restroom right now,” Heiman said.

Heiman hopes the new light board will help with students’ learning.

“The light board we are getting is so new, they announced its release last week,” Heiman said.

However, all these changes only amount to what Heiman calls “phase one.” The dimming system is still original to the building and the amplifiers are from the eighties.

“All of that will come, hopefully, with phase two, that will focus on the less obvious stuff like restrooms,” Heiman said.

“Every kid that is recruited walks through Rice Auditorium so why not make it look like a place they want to come to,” Heiman said.

He is not the only one who believes the renovations will help.

“I think I’m just excited about the opportunities it will present us with the theatre department and expand our abilities,” freshman Erin Laney said.

The plans for the new Rice Auditorium were drawn up eight years ago, but Heiman applied for a grant that could get the project done. He hopes the construction will be over in a few weeks time so the auditorium will be open to use once again.