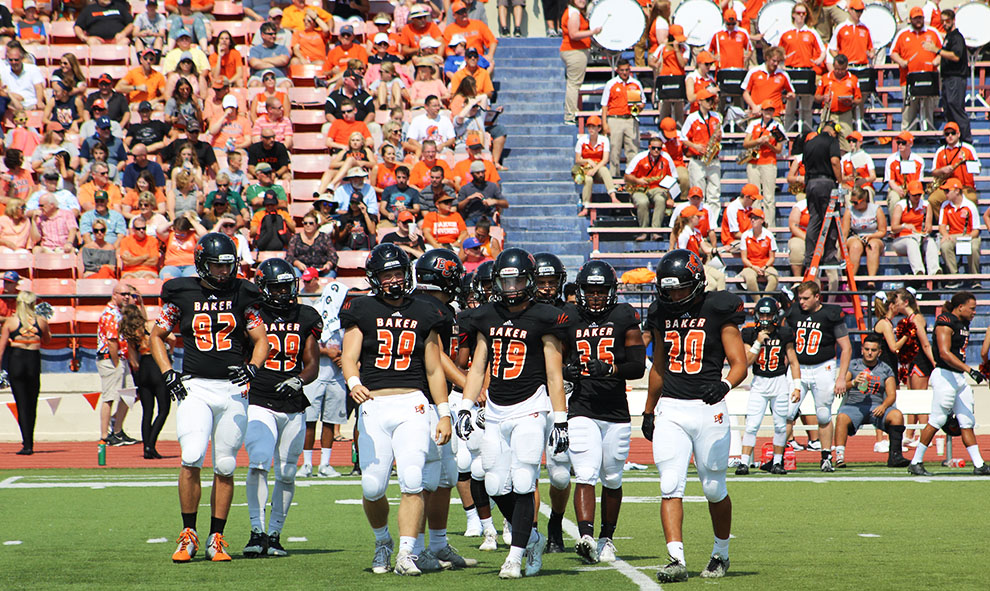 Lightning delayed the homecoming game against Graceland in the third quarter with 7:02 remaining. The game restarted over an hour later and led to a 66-14 win.

The Baker Wildcats brought home another victory after defeating the Graceland Yellowjackets 66-14 at Liston Stadium on Sept. 16.

Baker took the lead early with freshman J.D. Woods scoring for the Wildcats 1:25 into the game off of a 19-yard pass from senior quarterback Logan Brettell. Senior Clarence Clark scored the extra point for the Wildcats giving Baker the 7-0 lead with 13:35 in the first quarter.

The Wildcats extended their lead to 14-0, with Woods scoring another touchdown, followed by an extra point by Clark.

An interception by junior Keegan Schumann allowed for Woods to run in his third touchdown of the game, giving the ‘Cats a 20-0 lead with over half of the first quarter left to play.

Schumann was then called for targeting after a hard hit to Graceland’s quarterback, forcing the junior to sit for the remainder of the game.

With 4:58 left in the first, senior Abram Garcia sealed the Wildcats’ early lead with a 45-yard field goal. At the start of the second quarter, Graceland trailed Baker 23-0.

At the beginning of the second quarter, Woods earned his fourth and final touchdown for the night, extending the lead to 30-0 after the extra point from Clark.

Late in the quarter, Brettell completed a 4-yard touchdown pass to Clark, followed by an extra point by Clark to take a 37 point lead over the Yellowjackets.  With 1:29 left before the half, freshman Nick Snider caught a 33-yard touchdown pass from Brettell, which was followed by senior Josh Kock’s 10-yard fumble return. After two extra points from Clark, Baker led Graceland 51-0 at the half.

Graceland was able to find some rhythm in the third quarter with a touchdown pass from Preston Compton to Caleb Thomas. Darnel Uran completed the extra point attempt, putting the Yellowjackets on the board.

After Graceland’s touchdown, the weather conditions caused a delay with 7:02 remaining in the third quarter. After an hour-long delay, play resumed resulting in a second touchdown from Compton to Thomas. After the extra point from Uran, Baker led Graceland 51-14.

Baker powered back at the end of the third quarter with freshman Brandon Mueller rushing for a 50-yard touchdown.

In the fourth quarter, Baker sealed a 66-14 Homecoming victory with a 2-yard run from freshman Justin Howard, with the extra point completed by Clark.

Woods lead the team with 112 yards rushing, followed by Mueller with 75 yards.

The Wildcats will now travel to face Heart of America Athletic Conference rival No. 16 Benedictine at 1 p.m. on Saturday, Sept. 23, in Atchison, Kansas.