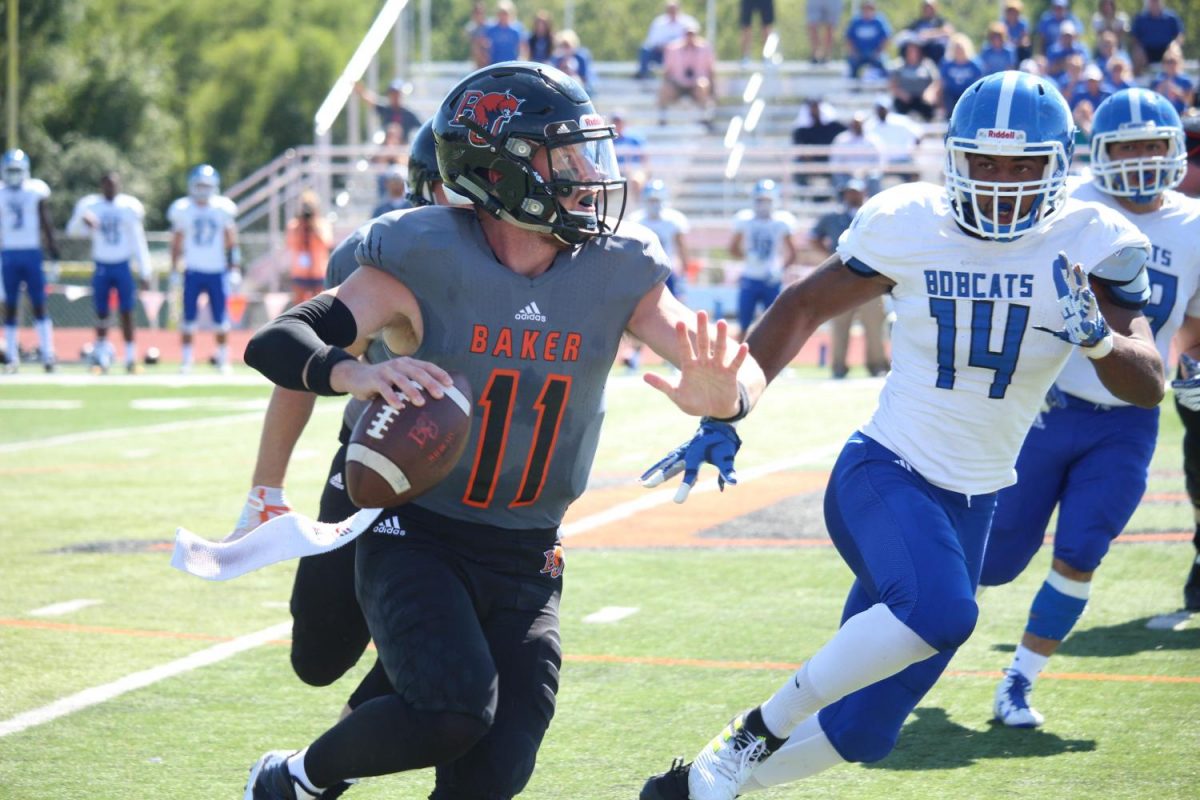 Quarterback Logan Brettell scrambles and looks for a receiver down field. Brettell would end the game with a school record of 84 career touchdown passes.

The Baker football team had another record-setting game this past Saturday, when the team defeated Peru State 65-42.

While Brettell and Clark are both seniors on the team, roughly 60 percent of the football team this year is made up of freshmen and sophomores.

“We’re a very inexperienced team when you really think about it,” Brettell said. “Last year we had around 20 seniors that graduated, so we lost a lot of experience.”

Baker and Peru State battled back and forth at Liston Stadium but the Wildcats never gave up the lead in their 65-42 victory. The Bobcats managed to tie the game once in the first quarter, before the ‘Cats pulled ahead for the remainder of the game.

The Wildcats gained an early lead with a 70-yard run from freshman JD Woods, accompanied by an extra point by Clark, giving Baker a 7-0 lead with 14:40 to play in the first quarter.

Woods is just one of the new members of the team who has made a large impact this season.

“Guys like Nate Pauley and Nick Snider, JD Woods, who have never played here at Baker have already made huge impacts,” Brettell said. “They’re making a bigger impact than I think they even expected to make.”

Peru State responded with a touchdown of its own, tying the game with 8:32 left in the first quarter.

Baker then took a demanding lead with three touchdowns. Freshman Nick Snider and sophomore Tywonn Moss each scored one touchdown off of passes from Brettell. Baker’s last scoring run of the first quarter was a carry by Woods, earning his second touchdown of the game. After three successful extra point attempts by Clark, the ‘Cats lead Peru State 28-7.

Baker and Peru State traded touchdowns in the second quarter. The Bobcats scored on a handoff, before Clark scored a touchdown of his own. Baker maintained a 35-14 lead, heading into the third quarter.

Baker’s leading tackler, junior Indie Allen, picked up a fumble and ran for an 80-yard touchdown to start the second half off for Baker.

Brettell opened up the fourth quarter with the record-setting 99-yard touchdown pass to Clark. Peru State followed up with a touchdown of its own, making the score 56-21 with 10 minutes left to play.

Woods completed a 20-yard run to earn Baker’s last touchdown of the game.

Peru State’s Justin Haystrand worked to keep the Bobcats in the game with a touchdown, shortening the Wildcats lead to 62-35.

With 4:20 left to play in the game, senior Abram Garcia kicked a 39-yard field goal, completing Baker’s scoring for the day. The Bobcats ended the game with one last touchdown by Peru State’s Jackson Betty.

Baker’s 65-42 victory is the team’s sixth win in a row and includes the team’s 21st Heart of America Athletic Conference win in a row. The Wildcats will now have a bye week next week, before returning to Liston Stadium.

With the bye week, one of the Wildcats’ main focuses will be getting healthy again.

“Playing six games in a row against really good teams like Grand View, Benedictine and William Penn you get beat up pretty quick,” Brettell said.

Baker will face Heart rival MNU on Oct. 14 in Baldwin City. The game will be broadcast on the Watch ESPN App/ESPN 3 and locally on KSMO-TV.