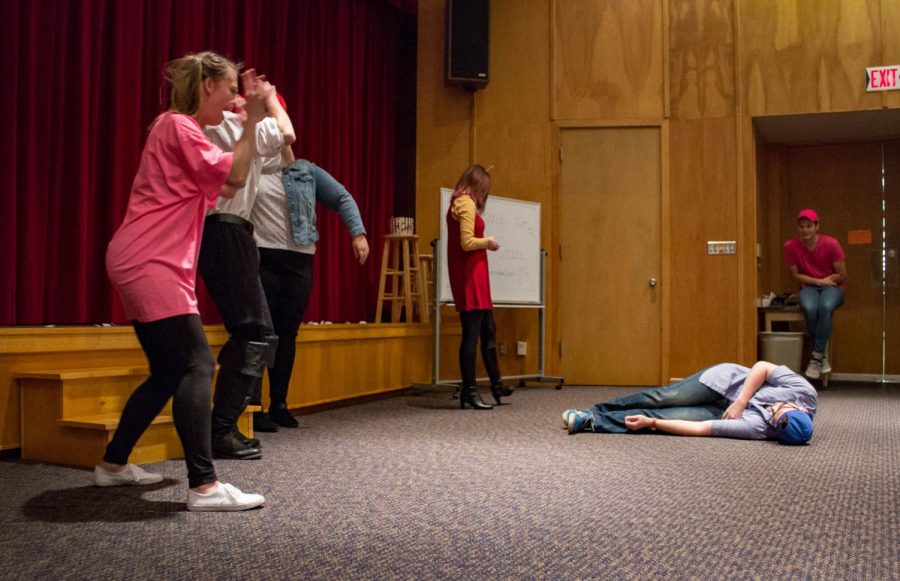 Junior Noah Taylor lies on the ground after being "murdered" by one of the cast at the Loud Noises annual Murder Mystery Show on Oct. 31. Taylor's character was an accountant named Abdul, but his boss, played by senior Destiny Bruno, called him Paula instead. It was revealed at the end that the overly-happy character Betty, played by freshman Cassidy Drabik, was actually the killer.

Junior Noah Taylor is a member of the improv club and has been involved in improv since high school.

“I chose to join the group because I really enjoyed doing improvised duet acting in high school,” he said. “This group isn’t very different than that, so it was a great fit.”

Taylor believes that being a part of Loud Noises has benefitted him both on and off the stage. Adding quick-thinking skills to his resume has helped him in his professional life as well.

“This group has done amazing things for me as a student and as a person,” Taylor said. “As a student, this group provides a fun way to de-stress after a long week. As a person, it’s forced me to become better at thinking on my feet, not to mention it has always seemed to stand out on my resume. Employers are always looking for groups that inspire quick thinking.”

Junior Emily Sutherland became involved with the group when she was a freshman. According to Sutherland, while being an improv actor has its good days and bad days, she has found being a part of the group has been a way to relieve the stressors of campus and student life.

“It’s helped me grow as an actor, but it can be really tough to improvise,” Sutherland said. “There are some practices where I go in and I feel like I’m on fire, I’m on a roll and I have all the funny jokes, but there are sometimes where I’m like, ‘I got nothing.’”

Sutherland also admits enjoying the opportunity to offer a funny form of relief for other students on campus. Sutherland hopes that any students interested in becoming a part of Loud Noises will get involved and come to a practice to see what the club is all about.

“Don’t be afraid,” Sutherland said. “Some people are very intimidated, thinking they have to be funny all the time, but that’s really not the case. You can’t be afraid to make a fool of yourself. Our audiences don’t come in thinking that we look stupid, they laugh and find us funny.  It takes practice, but we’ll help prepare you and train you.”

Senior Kinsey Ford has enjoyed improv since eighth grade and immediately knew Loud Noises was for her when she came to Baker. For Ford, one of the challenges of being an improv actor is simply overthinking things.

“Maybe people tense up and think about what they are going to say for too long,” Ford said. “That was probably the most difficult thing for me to overcome so far.”

While auditions have concluded, Sutherland and Ford acknowledge the group’s need for new members, particularly men.

“One of the hardest things we’ve had to deal with has been recruitment,” Ford said. “Our numbers for Loud Noises are fairly low, and we are in need of more members.”

For students looking to watch or get in on the ‘act’ion, Loud Noises meets at 8 p.m. on Sundays in the McKibbin Recital Hall.