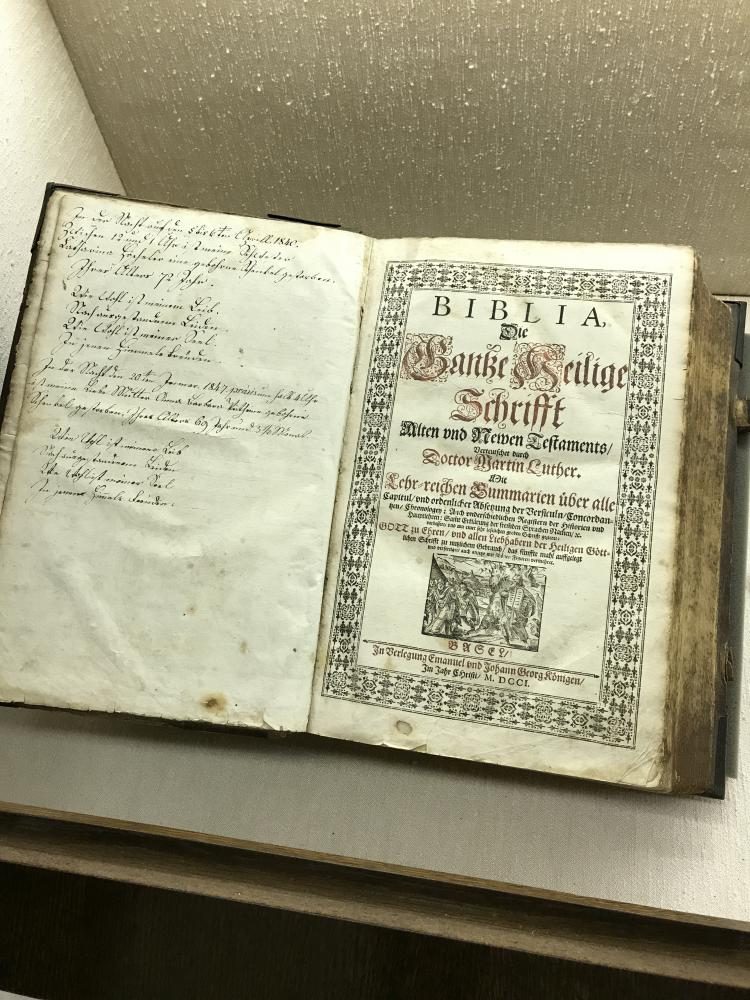 One of John Luther's translations of the Bible with a German family's writing on the side. This is a newer Bible, written in the 1700's.

Almost 500 years ago in Wittenberg, Germany Martin Luther nailed the Ninety-five Theses on a church. Following this occasion, Luther’s ideas regarding religion and the institution of the church forever altered western thought and changed the way people view religion and society.

Baker University’s own Quayle Bible Collection is commemorating the occasion with an exhibit entitled “Revolution, Rebellion, Reformation: 500 Years after Martin Luther.” Because of its impact on modern society, the Quayle collection is featuring important events that directly followed the Protestant Reformation and showcasing important bibles from that time.

The exhibit features books from the Quayle collection as they relate to the Protestant Reformation and the following events.

“All the books from the display are from the original Quayle collection that was donated to Baker. Nothing was added but that shows you what the Bishop was really interested in,” Nicholaus Pumphrey, associate professor of religious studies, said.

Some books featured in the new exhibit include an original King James bible, King Henry’s edition of the bible, and an original leaf from a Gutenberg bible. The Gutenberg bible holds special significance due to its relation to the first printing press.

The collection also features a bible commissioned by Queen Elizabeth I during her reign in the United Kingdom.

“In order to create the exhibit, Pumphrey and I had to go through the Quayle catalog and find Bibles and other texts that were inspired during or because of the Protestant Reformation,” Lee said.

Susan Emel, professor of communication studies, took her Quest 211 class to see the exhibit as it directly relates to what she is teaching her class.

“American founders were directly impacted by the reformation and the King James Bible,” Emel said.

America and the Protestant Reformation may not seem directly correlated, but the founding fathers were impacted by the ideas that came about because of the reformation.

In addition to the bibles being on display, there are informational posters giving more information on the exhibit above each display case.

“The posters feature lesser known people and groups like Galileo. I include the scientific revolution with the Protestant Reformation because of Galileo, like Luther, challenges the church with his own ideas and observation,” Pumphrey said.

Pumphrey wants students to understand the impact of the Protestant Reformation extends much farther than the religious aspects it is often associated with. Other schools of thought were inspired or created because of Luther’s original questionings into the actions of the Catholic Church.

The actual 500-year anniversary occurs on Oct. 31 and the Quayle Bible Collection will be open to all students for viewing.  However, the exhibit will remain open until May 20, 2018.