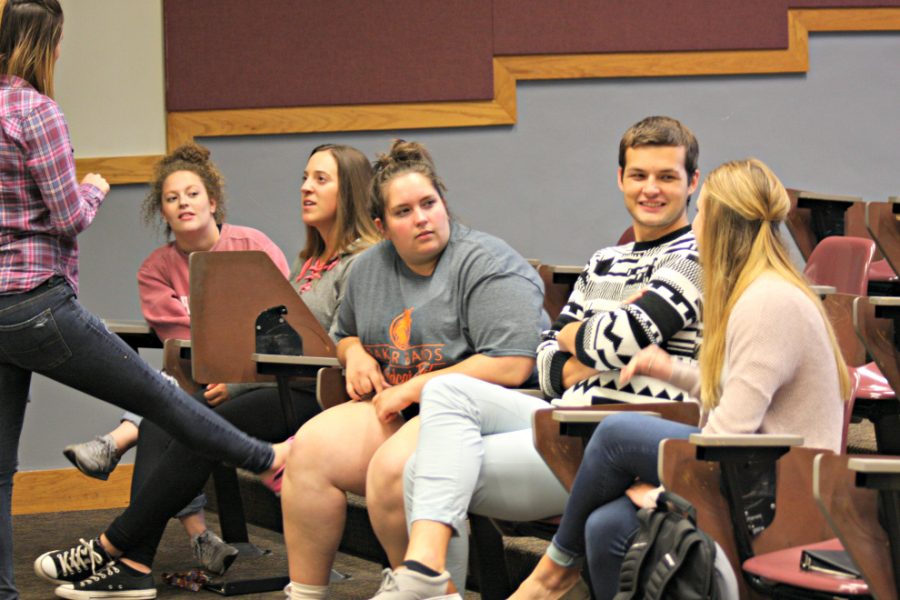 The students combine their groups and tell each other the odd foods that they used to eat, and still eat today.

Dressed from head to toe in black attire and holding notebooks full of scripts are only two of the descriptions needed to portray the members of the Baker University Speech Choir. This unique group of students from all different majors is entering its 14th year on campus this fall.

“Speech choir is the most enjoyable way to improve your public speaking skills,” senior Jordan House said. “My favorite part is being able to do the new student visit days so we can showcase ourselves well.”

The Director of the Baker University Speech Choir Susan Emel founded the program in 2003 after a discussion with the Bander Professor of Preaching at the Candler School of Theology Fred Craddock.

“He suggested starting a speech choir at Baker,” she said. “Its structure allows for the reading of scripture so that the congregation can hear it from different aspects.”

As the group performs at eight to 10 different events throughout the semester, Emel works to construct her own scripts to match various themes and requests. She also sees her roles as “everything behind the scenes,” as she coordinates with the event holders, determines any needed adjustments to venues and organizes necessary transportation.

“Sometimes we’ll repeat the essence of a performance we’ve done before,” she said. “However, I like to start fresh with the scripts every time.”

Emel, along with her cohorts Russell Taylor and Philip Schiffelbeing, work with a group of elected executives, one of whom is the current president of the organization, senior Annie Hanson.

“My favorite part of speech choir is the uniqueness of the organization,” Hanson said. “This is an organization unlike any other that allows students to express themselves and practice oral presentations and communication skills in a fun environment.”

The Wednesday evening course is split into two separate sections within its two-hour time slot. As the president, Hanson leads much of the group discussion at the beginning of the meeting, before breakout sessions on individual presentation skills and preparation of new performances take place.

“The officers lend a student voice and presence to the decisions that we make about how the group is run,” Emel said. “It has evolved into a course that is also fun, and we work really hard to preserve that aspect.”

Though students can earn one credit hour through the course, they can also receive a participation scholarship to supplement their efforts.

“I initially decided to join speech choir with the encouragement of a sorority sister to improve my public speaking skills,” Hanson said. “I’m naturally a very talkative person, but public speaking to my peers was virtually impossible. Once I joined, it took some time to work on those skills, but now I know for a fact I wouldn’t have survived college without it, especially being a [mass] media major.”

Luckily, that is the gist of the organization, as the current group of 25 students comes from a wide range of experiences and interests.

“This year, for the first time ever, we have only nine returning students and 16 new ones,” Emel said. “As speech choir has evolved we have started taking anybody who wanted to improve their speaking skills. We like forensic participants, theatre students and even those who are simply afraid of public speaking.”

Their performances throughout the semester, however, depend largely on outside groups coming to them with requests. As one considers bringing uniqueness to his or her next event, look no further than the Baker University Speech Choir.