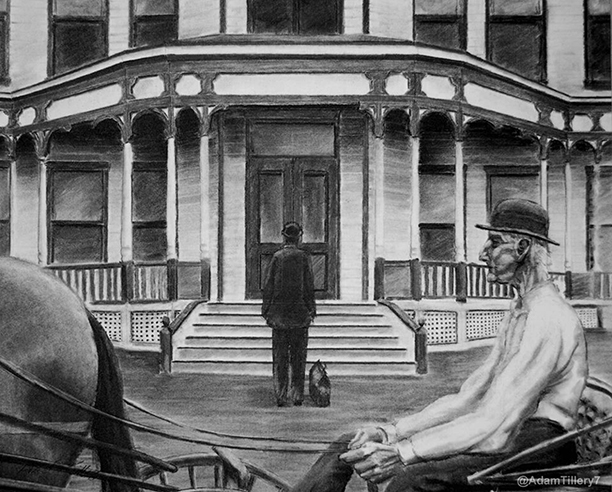 An investigation is underway at Baker University. No crime was committed, no suspects are in custody and all people relevant to the case are dead.

On Saturday, Oct. 28, two paranormal investigation groups, Earthbound Voices Paranormal (EVP) and C.R.E.E.P.Z Ghost Commandos are teaming up to search for spirits in buildings around campus. The Old Castle Museum and Parmenter Hall will be of interest to the groups when they investigate.

Students and staff are welcome to join the two teams with their investigation and will be able to handle equipment and gather any evidence that may indicate signs of ghosts.

Alec Tillery and his brother Adam Tillery are two of three members of the C.R.E.E.P.Z team and believe in the importance of educating the public. The third member is Gideon Coyle, a life-long friend of Alec and Adam.

“Both of our groups are big on history and education,” Alec said. “We are happy to volunteer our time and help out.”

Both teams are bringing lots of equipment to detect signs of the paranormal around campus.

Some students will be familiar viewers of prominent ghost shows. The K-2 meter and the millimeter are both standard equipment and measure the amount of electromagnetic energy in a room, the energy that many believe ghosts are made of.

Other equipment used will be thermal imaging cameras, night vision cameras and an SB 7 spirit box which sweeps frequencies of sound. It is believed spirits can use this device to communicate with people.

Another piece of equipment that will be used was designed by Adam Tillery. He calls it the para-vane and it is modeled after a wind vane on top of barns.

“Imagine a wind vane, it tells you which way the wind blows. I took that idea and designed and invented an object that can point to a ghost,” Adam said.

Since ghosts are believed to be made of electromagnetic energy, the para-vane has magnets attached and Adam hopes the magnets will point in the direction of other magnetic energy in a room.

Alec recommends that students and staff who go with them on the investigation wear comfortable, weather appropriate clothing and shoes, and also bring a flashlight.

C.R.E.E.P.Z began investigating in November of 2008 and have investigated upward of around 20 locations in the Kansas and Missouri area.

EVP, run by the husband-wife duo Jim and Tami Beth, began their group three years ago and have been on full investigations 16 times. The Beth’s had experiences with the paranormal in their childhood homes and neither thought of starting a paranormal investigation group until the opportunity presented itself.

“We always thought of the equipment as expensive,” Jim said. “We were buying storage lockers and [when] we found a bag of investigative equipment there we decided to take it and start investigating.”

For the Tillery’s, their journey began in their home in Kansas City when Alec began seeing the apparition of a man, believed to be the previous owner of the home. Both brothers felt the presence was a positive one so they have made it their goal to promote the positive ghost stories and want people to understand that ghosts exist for a good reason.

It’s for that reason that both EVP and C.R.E.E.P.Z don’t charge for their services.

“I’m a strong believer of free services because, one, it feels wrong to make money off the dead. If we do make a profit, it goes right back into the place we are investigating for renovations,” Adam said.

Although both groups generally work alone, C.R.E.E.P.Z and EVP have teamed up to do an investigation together before. Their first joint investigation was at Beattie Mansion in St. Joseph, Missouri.

The two groups met last year at Kansas City’s Paracon, a place where enthusiasts of the paranormal can gather and share ideas and ask questions of other investigators.

“Adam and Alec had a booth set up and I went over and I probably spent two hours talking to them,” Tami said.

“We work great together because we have similar styles and techniques,” Adam said.

Because both groups do not charge clients for their services, all investigators have daytime jobs to fund their operations.

“This is a very expensive hobby,” Alec said.

However, Adam’s full-time job may soon be related to the paranormal as he has published a book filled with accounts of the paranormal and coal drawings of the dead. He published his book, “Mischievous: Ghost Stories and Illustrations,” two years ago.

Authors will contact Adam, tell their stories and then Adam will send them a charcoal drawing of what the person saw.

“Everyone seems to think the drawings are uncanny,” Adam said.

Along with his own book, Adam has illustrated four others. One was a three-volume set entitled “Encounters with the Paranormal” and the other book is “My Life Amidst the Paranormal.”

C.R.E.E.P.Z has a YouTube channel which has videos documenting all investigations they have completed. The channel can be found here. EVP has a website where people can contact them and view videos of evidence they have collected.