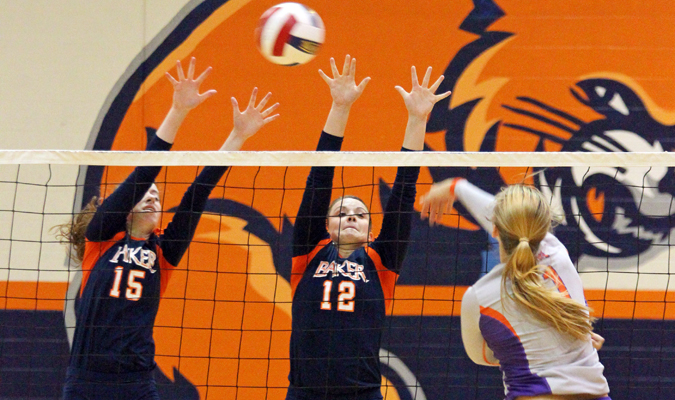 Sophomore Shannon Bond and senior Crystal Simon jump to block a spike during the match against Missouri Valley on Sept. 17 in Collins Gym. Baker won in three straight sets, handing Missouri Valley its first loss of the season.

Freshman Megan Milroy totaled 17 assists for the ‘Cats, followed by senior Jenna Sackman with 14. Sackman also led the team in digs with 19.

Senior Madeline McCrary had 13 digs for the Wildcats, and sophomore Ali Clark had nine of her own.

After the team’s senior night success, Baker is 6-12 in Heart of America Athletic Conference play and 13-18 overall. The Wildcats will play their last regular-season match on the road against Central Methodist at 7 p.m. on Tuesday in Fayette, Missouri.