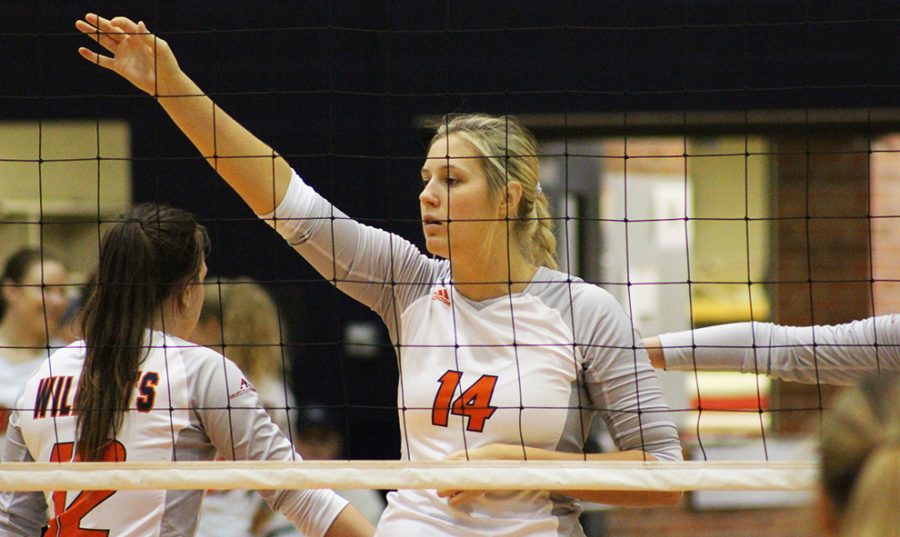 The Baker volleyball team’s season came to an end on Oct. 31 with a loss against Central Methodist University. The Wildcats fell in three sets against the Eagles, 25-20, 25-20, 25-21.

The team posted a 13-19 record this season, going 6-13 in Heart of America Athletic Conference play. The Wildcats ended on a similar note last year, going 12-20 for the 2016 season.

For senior Madeline McCrary this season saw both highs and lows with it being her final season at Baker. One of her highs of the season included starting the regular season with a win against Concordia a three-game sweep.

Some of the lows of the season included games that ended too close. These games McCrary refers to as “the games you want back.” For McCrary and the team, one those games they want back was against Heart rival MNU.

“I think MNU was a game that we could’ve had, taking sets away from them,” McCrary said. “That’s the first time I had taken a set from them my whole career.”

The Wildcats weren’t aware until hours before their final regular season match against CMU that making it to the Heart tournament this year wasn’t an option. McCrary and the team thought that in the event that the Wildcats won and Evangel lost, Baker would have a chance at the tournament.

“Coach [Windle] did the math and realized that no matter what we weren’t going to be in the tournament prior to starting our game,” McCrary said. “So before we even started against CMU, he came into the locker room and told us we weren’t in the tournament.”

McCrary says Windle did it out of respect and didn’t want the team to get their hopes up in the event of a win against CMU.

Tournament entry for Baker and Evangel came down to points from the teams’ head-to-head matches during the regular season. Baker defeated Evangel by 12 points, however, Evangel beat Baker by 17 points, giving the Crusaders entry into the conference tournament.

While the team is expected to lose a majority of starters, McCrary thinks there is a lot of potential with other members of the team who will return next season.

“They’re not losing skill, but they’re losing presence and that leadership,” McCrary said.

Expected returners for the Wildcats next season who look to lead the team include juniors Ashley Sparks and Olivia Brees. Sparks led the team in kills with a total of 393. Brees had 35 solo blocks and 121 block assists this season. Brees is also ranked third in Division I for total blocks with a combined total of 156.

This marks Matt Windle’s second year as head coach, after the retirement of previous head coach Kathy Allen. Allen coached the Wildcats for 18 seasons before Windle, building a 386-226 record, making her the winningest coach in Baker Athletics history.

Windle and the Baker volleyball team will continue to search for their first winning season since the 2013-2014 season.