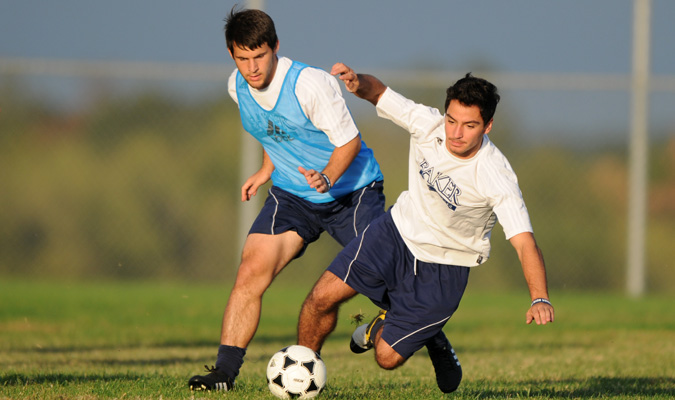 The No. 2 seeded Baker men’s soccer advanced to the semifinals of the Heart of America Athletic Conference Tournament after a heated 2-1 victory over No. 7 seeded Culver-Stockton Friday night.

In Baker’s last meeting with Culver-Stockton this season, the ‘Cats walked away with a 5-2 victory.

Junior Steeve Pouna was the first to put Baker on the board in the 27th minute after breaking past a group of Culver-Stockton defenders. Pouna’s fifth goal of the season was assisted by senior Brandon Milburn.

The Culver-Stockton offense responded with a goal in the 32nd minute from William Mansfield. Both teams continued to exchange shots until junior Austin Halsey found the back of the net in the 44th minute to put Baker in the lead 2-1.

The second half saw three yellow cards and one red card, but no goals from either team. One of Culver-Stockton’s assistant coaches earned a red card after continuing to heckle the referee’s decision on a previous foul.

Things continued to get choppy on the pitch with two Culver-Stockton players receiving yellow cards and Baker’s own Steeve Pouna being shown a yellow also.

The Wildcats were able to hold on to their 2-1 lead for the full 45 minutes of the second half, defeating Culver-Stockton and advancing to the Heart semifinals.

Baker will now face No. 3 seeded Central Methodist at 7 p.m. on Tuesday at Liston Stadium.