What do I call my professors? 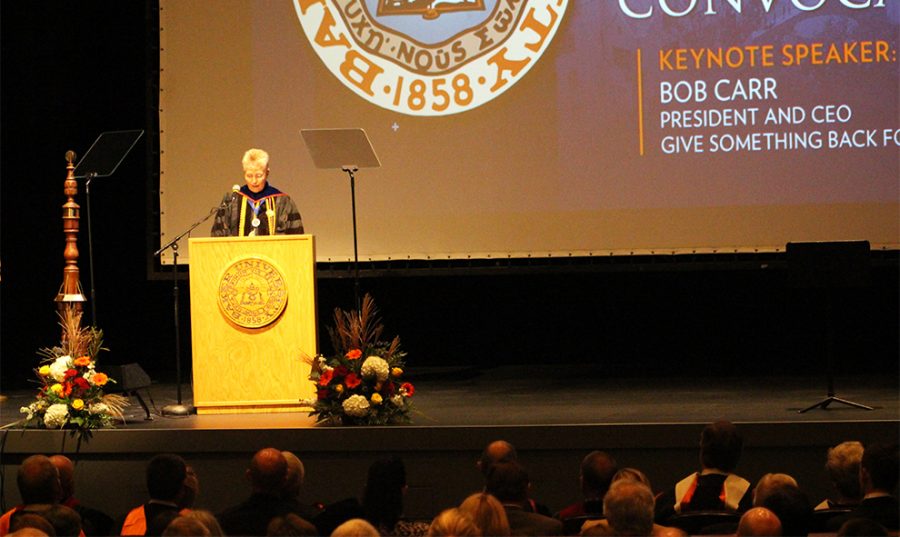 The opening remarks were given by Interim Provost and Professor of Education Tes Mehring before Professor of Business and Economics Alan Grant took the stage.

An incoming college student can be clueless as to the different titles that professors have and what those professors’ preferences are on their titles. Coming from high school, where Ms., Mrs. and Mr. are common, having to choose between instructor, professor and Doctor can be challenging.

“I have had some students who don’t know what to call me, but those are usually first-year students at the start of the semester,” Joanne Janssen, assistant professor of English, said. “I also try to introduce myself to my classes, and as part of that introduction, I try to give them an indication of what to call me to try to eliminate that confusion.”

Professor of Psychology Tony Brown said the issue is that students usually do not know how formal they should be when addressing their professors.

One way to know a professor’s preference is to listen to how they introduce themselves on the first day of class.

“I think it’s also wise to notice how they sign their e-mails to you, as that’s usually a good indication of what they would like to be called,” Janssen said.

Visiting Instructor of Spanish Katya Soll said students can sometimes “default to high school” when addressing professors. Although Soll prefers to be called “professor”, she corrects students who use the incorrect title, but not because she is personally offended.

Soll said she corrects students because using the correct title is a sign of respect in Spanish-speaking countries and she tries to prepare students for the potential exposure they could have to Spanish cultures.

This advice can also be used when addressing employers and others who are in a position of authority. By being more polite, until told otherwise, you can be sure that you are being respectful.

The issue of not knowing what to call your professor can be solved by playing it safe. Don’t address a professor informally until you are sure that it is okay with the professor.

“If they prefer something more casual, they will be totally open telling their students,” Janssen said.

If you are completely unsure what a professor would like to be called, just say “professor.”