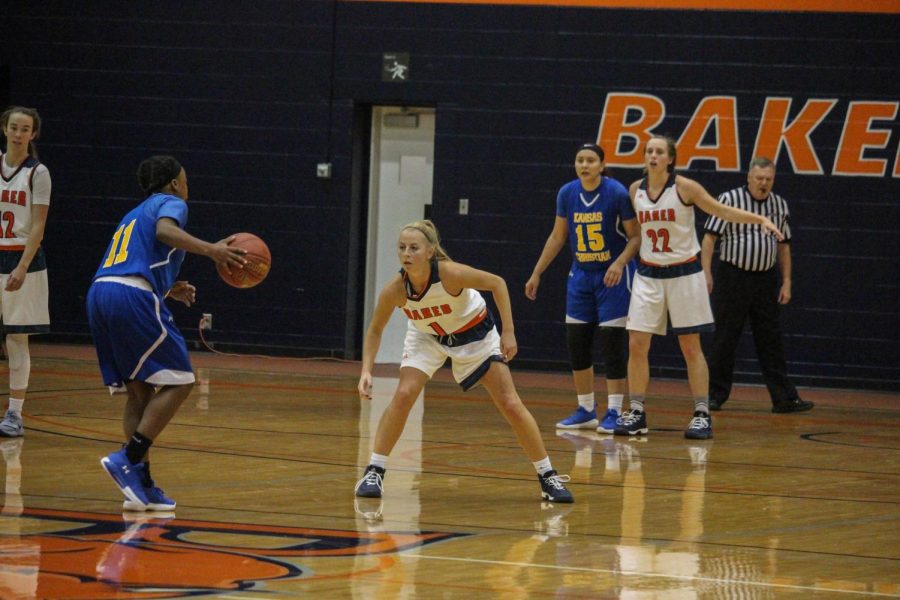 Hannah Madsen prepares to be on defense against Kansas Christian College.

The Baker women’s basketball team broke its record for most points scored in a game Tuesday after defeating Kansas Christian College 108-26 in the Collins Center. The victory was the largest margin of victory in coach Ben Lister’s era.

Senior Sydnie Hanson led the Wildcats with 21 points for the second game in a row. Six Wildcats including Hanson scored double digits against the Falcons.

Junior Anna Hignight had 15 points during the game, followed by junior Caitlin Modesett with 14, and sophomore Julia Bannister with 13. Freshman Hannah Madsen and senior Courtney Hoag had 10 points each.

Modesett contributed a game-high six assists and led the team with four steals.

Baker held Kansas Christian to 18 percent from the field and 14 percent from three-point range. Junior Kate-Lynn King led the team in rebounds with 10.

The Wildcats now move to 3-0 for the season after the record-breaking victory.

The women’s basketball team opened its season against the University of St. Mary on Nov. 3 posting an 83-76 victory, followed by a 79-55 victory against Ottawa University.

Unlike previous seasons for the ‘Cats, the women will continue to play non-conference opponents until the end of November. In the 2016-2017 season, the Wildcats began conference play after two games into the season.

The Wildcats will now travel to compete in the Benedictine Classic. Baker will face Park University at 5:30 p.m. on Friday and No. 24 ranked Lindenwood University at 1 p.m. on Saturday. Both games will be played in Atchison.