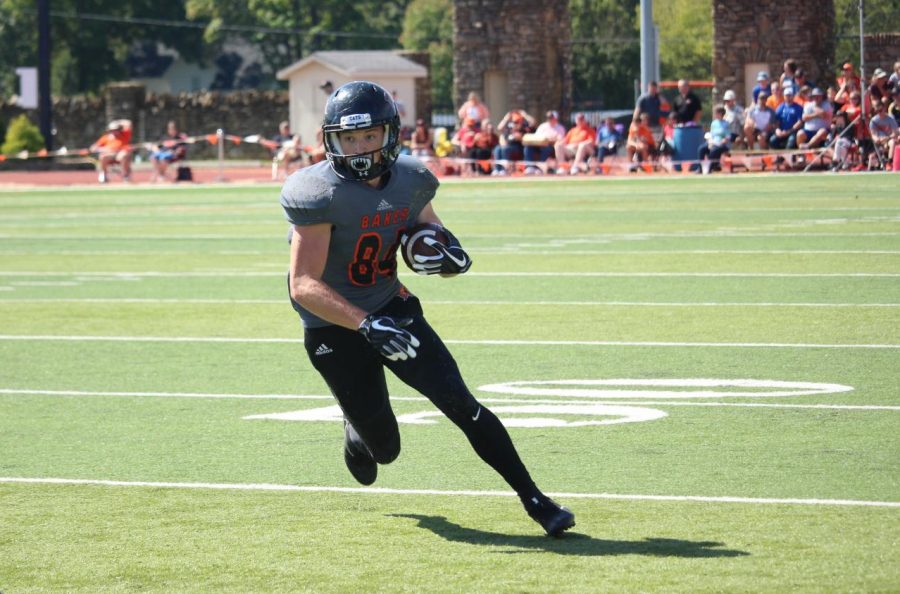 Freshman, Nick Snider looks to run down field after catching a pass. Snider would score a touchdown later in the drive.

Freshman JD Woods was the first to put Baker in motion with a 31-yard touchdown run two minutes into the game. The extra-point from senior Clarence Clark put the Wildcats up 7-0 in the first quarter.

Woods led the Wildcats with 111 total rushing yards against the Crusaders, while freshman Nate Pauly collected 99 rushing yards of his own.

With the ball back in Baker’s hands, Clark caught a 60-yard touchdown pass from freshman Marco Aguinaga. After an extra-point attempt from Clark, the Wildcats extended their lead to 23-6.

Aguinaga went 38-26 as the Wildcats quarterback, throwing for 259 yards.

On the Wildcats defense, junior Landon Decker recorded two sack for the Wildcats and sophomore Grant Elston and junior Nate McLaurin earned one interception each.

After defeating Evangel, the Wildcats are now 4-1 in the Heart South Division and 10-1 overall.

With the regular season complete, Baker has earned a berth into the NAIA-FCS Playoffs. In the first round, the Wildcats will host Georgetown at 1:07 p.m. Saturday at Liston Stadium.