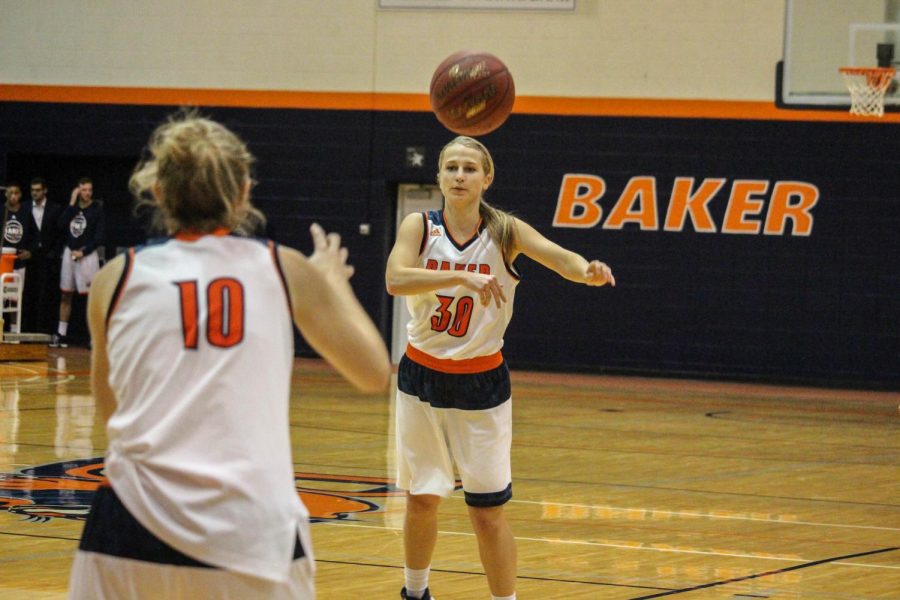 The No. 10 Baker Wildcats played two games at the Benedictine Classic over the weekend, posting a 1-1 record.

The ‘Cats earned a 78-63 victory over Park University on Friday, before losing to No. 24 Lindenwood-Belleville University 90-89, on Saturday.

Baker worked in the second quarter to shorten the gap to trailing by one point at the half, 38-37.

Baker took over in the second half of the game, dropping 25 points in the third quarter and 16 in the fourth. The Wildcats held the Pirates to just seven points in the final 10 minutes, earning their largest lead of 17.

Four Wildcats were in the double digits against the Pirates. Senior Anna Hignight led the team with 22 points. Junior Caitlin Modesett had 16 points, sophomore Jodi Atkins had 13 points and junior Jesse Zweifel had 11 points against Park.

After defeating Park 78-63, the Wildcats played Lindenwood-Belleville the next day earning their first loss of the season.

The game came down to the final seven seconds where the Lynx’s Alison Webb was able to drive to the basket and score as the final buzzer sounded, giving Lindenwood-Belleville the victory.

The Wildcats trailed in the beginning of the game before maintaining the lead through the third quarter. The fourth quarter saw three lead changes, including two in the final two minutes.

Modesett led the Wildcats against the Lynx with 20 points. Adkins, Hanson and Hoag had 16 points each. Hoag also earned four blocks against Lindenwood-Belleville. Baker shot 54 percent from the floor and 36 percent from the three-point line.

The Wildcats are now 4-1 for the season with a four-game home stretch ahead. Baker will face Columbia College at 7 p.m. Tuesday in the Collins Center.