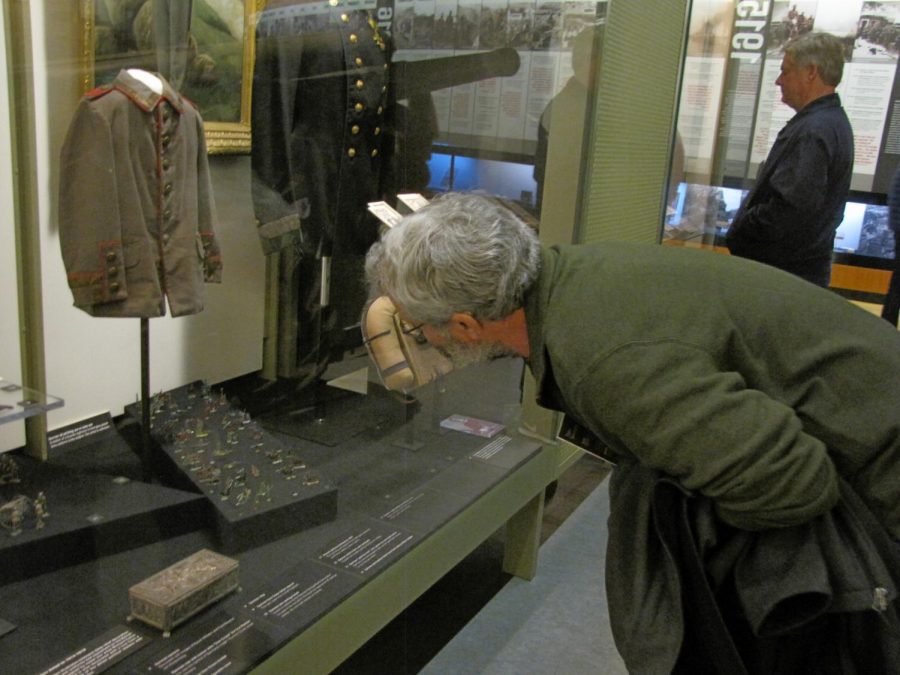 John Richards, professor of history, bends down to examine weaponry used in the first World War. Richards, along with History Club, visited the National World War I Museum in downtown Kansas City on Nov. 12 in honor of Veteran's Day. The museum features several artifacts including artillery, uniforms, medical tools and a tank, all used during the war.

This past weekend saw the passage of a national holiday we all celebrate and revere, but sometimes take for granted. Veterans Day has been a staple in American society since its conception as “Armistice Day” in 1918 to commemorate the end of World War I.

However, as the years have passed, and the horrors of both World Wars have slowly faded away from our national memory, and we tend to forget the true meaning of Veterans Day and the importance of honoring it and our veterans properly.

I started to confront this problem when I, along with the Baker History Club, visited the World War I museum in downtown Kansas City. Veterans Day is a big weekend there, as veterans and citizens alike gather to remember the great war. However, I began to question how I have celebrated Veterans Day in the past and how people and businesses celebrate the holiday in general.

For most, in the days leading up to the holiday weekend, our televisions are full of advertisements claiming to honor veterans with half-price deals on mattresses. They always claim to support the men and women who have fought to preserve our nation, but the message is downplayed with jingles and promises of big savings.

I’m not saying there is anything inherently wrong with advertising specials on holidays. That’s how businesses attract new clientele and gain revenue. What I am saying, however, is there is something wrong with the way companies conduct themselves during this time and use a day honoring veterans as a sales tactic.

The World War I museum really opened up my eyes to this issue. As a history major, I tend to look at things, like war, in the abstract, not really concerned with the reality of the situation so much as I am with the impact.

However, something changes when you visit a place like that with veterans in mind. It’s seeing the pictures, reading the letters written, witnessing the harsh conditions they went through, looking into their lives and the hell they struggled with every day. It helps put the war in perspective.

In today’s age, we view war with cynicism. Few of us would enlist in the military unless our nation required it. This mindset hardly existed at the time of World War I. These men and women gave their lives for a cause they believed in. Honoring that ultimate sacrifice is what Veterans Day is all about.

Now, people can disagree about the morality of the United States’ military and critique things it has done. That’s what being a good citizen is all about. Questioning things that don’t make sense. However, failing to honor veterans because of those beliefs is just disrespectful.

Veterans Day does not exist for sales. It does not exist for questioning our current military agenda. It does exist because we need to remember that when the world was on the brink of tearing itself apart, people answered the call and helped fix it.