Football ends season in first round 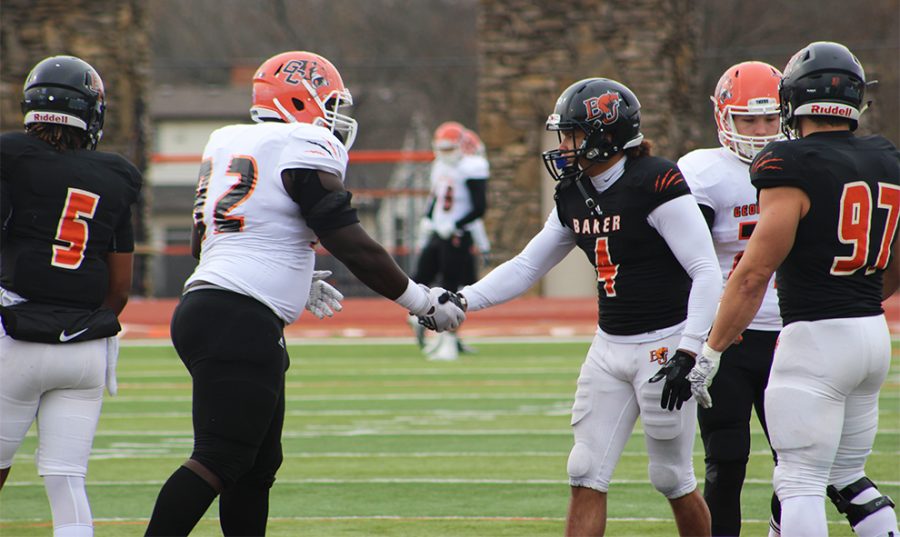 Junior Nate McLaurin greeted the opposing team before the coin flip. The Wildcats won the coin flip and the game began at 1:05 p.m. on Nov. 18.

The Baker football team ended Saturday in an NAIA-FCS first round 36-33 loss to Georgetown College.

The Baker Wildcats end their season with a 10-2 record, while Georgetown improves to 10-1 and moves on to the NAIA-FCS quarterfinals.

Georgetown proved to be Baker’s hardest opponent this season in a game that saw seven lead changes.

The Wildcats were able to start the game on top with senior Logan Brettell as starting quarterback throwing a pass to freshman JD Woods in the first play of scrimmage. Senior Clarence Clark completed the point-after attempt to put Baker up 7-0 with 14:42 left to play in the quarter.

The Wildcats were able to extend their lead to 10-0 with a 38-yard field goal from Clark.

Georgetown’s offense was kick-started by their defense after an interception with seven minutes left in the quarter. After the interception, Georgetown’s Daric Pugh put the Tigers on the board with a field goal from Jack Nguyen, before Riley Hall carried the ball in for another Georgetown touchdown. Ngyuen’s kick was good, giving the Tigers a 14-10 lead over the Wildcats.

The Baker offense fought its way down the field to put Clark in the position for a 36-yard field goal. Clark’s kick was good, sending Baker into the second quarter trailing 14-13.

Senior Abram Garcia started the second quarter for the Wildcats with a 43-yard field goal, giving Baker a 16-14 lead.

Baker owned the rest of the second quarter with a 20-yard touchdown run from Woods and a 35-yard field goal from Garcia.

The Wildcats led the Tigers 26-20 going into halftime.

Georgetown started the third quarter with a 17-yard touchdown pass from Riley Hall to Cart Bell. After a successful extra-point kick from Nguyen, the Tigers led the Wildcats 27-26 with 12 minutes left to play in the quarter.

A pivotal point for the Wildcats came later in the quarter when junior Nate McLaurin was able to block Nguyen’s field goal attempt. Sophomore Grant Elston was there to recover the ball and take it downfield for a 79-yard touchdown. After Clark’s extra point the Wildcats once again led the Tigers 33-27.

Georgetown ended the quarter on a high note with an 8-yard run from Kyle Longworth and an extra kick from Nguyen, resulting in the Tigers taking the lead from the Wildcats one last time.

At the start of the fourth quarter, the Tigers led Baker 34-33. Georgetown’s last scoring opportunity of the game came when the Tigers were able to score on a safety, ending the game with a 36-33 loss for the Wildcats.

On the Baker defense, junior Indie Allen led the ‘Cats with 10 tackles and senior Hayden Jenkins picked up an interception against the Tigers, his third at Baker.

With the end of the football season, Baker will say goodbye to some seniors that were vital to the team’s success over the past few years.

Brettell, despite an injury, will remain the leader in total offensive yards in a season with 5,371 and maintain his title as the record holder for numerous passing records.

Clark will end his career at Baker as the NAIA all-time leading scorer and First Team All-Conference for the fourth year in a row, with more than seven records broken in his time with the team.