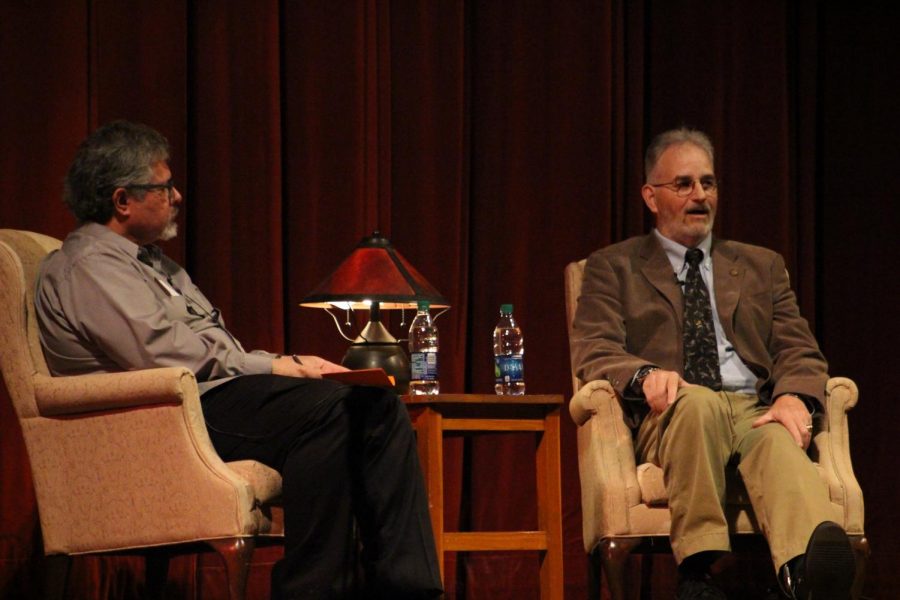 Associate Professor of History Leonard Ortiz (left) leads discussion with Vietnam veteran John Musgrave (right) about his time during the war and his life after serving. Musgrave attended Baker University and currently lives in Baldwin City with his wife.

Baker University hosted Vietnam War  veteran and former Baker student John Musgrave on Nov. 19 for a discussion about his experiences in and after the war.

Leonard Ortiz, associate professor of history, led the discussion with Musgrave and afterward the audience was able to ask questions.

Before the discussion began, speech choir performed a piece about the Vietnam war.

“I shared with Susan Emel [Speech Choir Director] two letters that my brother had written during the war and she incorporated the letters with Musgrave’s poetry which resulted in a very powerful and moving performance,” Ortiz said.

Freshman Cassity Drabik is a member of Speech Choir and was impacted by the performance she was a part of.

“It was emotional,” Drabik said. “It opens your eyes to how much war affects people.”

She also appreciated the poem Musgrave wrote regarding the man who shot him in combat, saying “it was a very brave thing to say.”

Musgrave began writing poetry when he was a student at Baker and has since published three books of poetry, each dealing with his time in the Marine Corps and serving in Vietnam.

His most popular book “Notes to the Man Who Shot Me” was mentioned in the Ken Burns and Lynn Novick documentary “The Vietnam War.”

Musgrave was featured extensively in the documentary and was shown in many episodes in interviews as he discussed the horrors he lived through.

Ortiz met with Musgrave before the event and instantly connected with him.

“I knew that he was someone special by his eloquence, compassion and humility,” Ortiz said.

Ortiz wanted the presentation with Musgrave to feel like a conversation so he only prepared a few questions before the beginning of the event.

Musgrave spoke candidly about his time in the war and the feelings he has about his service and the war he fought in.

Listening to Musgrave speak, however, did not alter Ortiz’s thoughts on the war as he has firsthand experience with how it affects those who fought in it.

“Because of my brother’s experiences and listening to John [Musgrave] and others talk about the war, I’ve always believed that this was one of America’s great tragedies,” Ortiz said.

Not only were professors affected by Musgrave, but so were students who attended.

Senior Cory Peoples attended the event and gained a new perspective because of it.

“We need to support our veterans and I didn’t think about that before now,” Peoples said.

Musgrave also gave a human perspective to the war, and Ortiz felt that was essential in understanding the war on a more personal level.

“What I did learn from John [Musgrave] was what it means to truly be a soldier,” Ortiz said. “As a soldier, he understands the true meaning of valor, honor, sacrifice and how sacred life truly is, and what it means to love one’s country.”