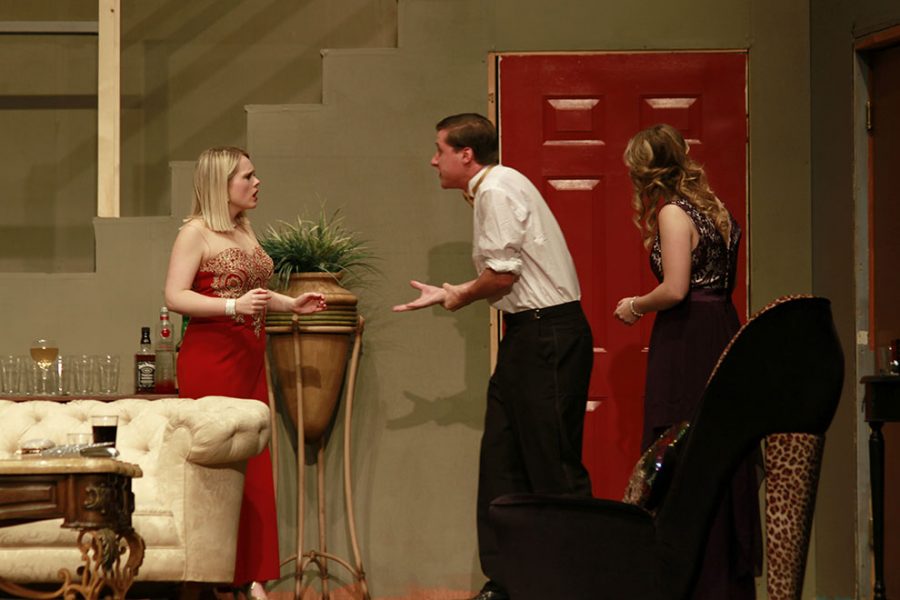 The Baker University Theatre Department recently put on “Rumors,” a comedic show that followed six people attending a dinner party where something had gone horribly wrong before the dinner party began. This show joined only two others in Baker’s history to be considered to attend the regional Kennedy Center American College Theatre Festival.

For Instructor of Theatre and Production Manager Patti Heiman, this honor is very meaningful, as it is essentially the same as advancing to the final game in a sports competition.

“There are over 300 shows entered and they usually hold approximately 16-20 [shows] to discuss at a meeting with the selection committee.  That meeting will be held about mid-December and we will be notified then if we are invited to move on,” Heiman said. “This is equivalent to being in the finals in sports.”

If the show is chosen, it will involve a performance of the show at the festival, and then will be in the running to move on to the national festival. Schools all over the nation and of all sizes, including graduate schools, compete for this honor.

For sophomore and actress in the production, Erynne Jamison, being considered for this award validates the cast’s hard work and is a source of pride for all involved.

“I know that my fellow actors, as well as the crew, stage manager, director and everyone involved in the production, worked so very hard to present a show that others would enjoy and we could all stand back from and feel proud of what we accomplished,” Jamison said. “The recognition and consideration of the show only validates all of the effort put into it, and I am very proud of not only myself but mostly of the theatre as a whole.”

In addition to being considered for this competition, three other cast members, Noah Hastings, Destiny Bruno and Jason Shipps are now Irene Ryan Acting Nominees. All other awards that the show received will be announced in January.

For Jamison, this show was a learning experience that she enjoyed.

“I have only had a handful of experiences working with farcical comedy, so keeping up with the fast pace of the show was definitely a learning experience for me and was something that I ultimately enjoyed and would like to do again,” Jamison said.

Those who attended the show enjoyed the humor and wittiness that the cast presented. Sophomore Hannah Greer was particularly fond of Hasting’s monologue at the end of the show.

“My favorite part of the play was Noah’s monologue at the end because it seemed to be the climax of the play and the culminating moment of the comedy,” Greer said.

With this show done, the Theatre Department is already looking forward to the next show and hoping that it can have the same success that “Rumors” did.

“I know that both Tom and Patti have a vision for the success of each production and I always look forward to seeing it accomplished,” Jamison said. “My only goal is to be of help in any way that I can in order to put together great shows for our theatre.”