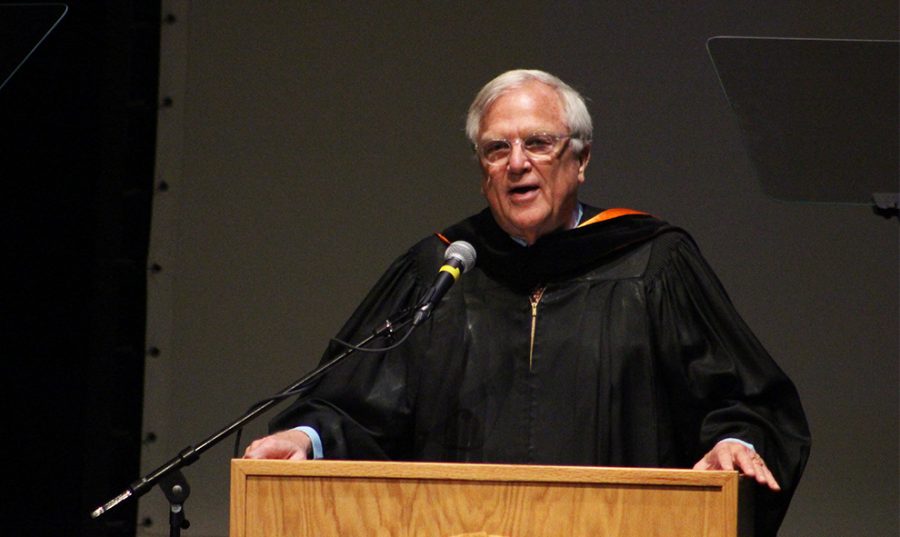 Keynote speaker Mr. Bob Carr is President and CEO of the Give Something Back Foundation. Carr was the 2017 Keynote Speaker at Convocation this year in the newly renovated Rice Auditorium. Carr generously donated a $1 million gift to be used for Baker scholarships.

When it comes to selecting an undergraduate university, cost often leads the way as a decision maker for high school seniors. Colleges and universities all around the nation work to provide scholarships for students to help offset the sticker price.

“The Harter Scholarship competition is one of the coolest experiences I have been a part of,” 2017 recipient Dylan Kort said. “The day was the first step in my Baker journey, and I am really glad I was given a chance to take that leap.”

According to the Baker website, to qualify for the competition high school seniors “must have a GPA of at least 3.9 and ACT score of 29 or higher, or a ranking in the top 1 percent of their graduating class and at least a 27 ACT.” Though the exact number of competitors changes each year, the maximum number of participants is 24.

With Baker’s top academic scholarship on the line, competitors are put through a rigorous day, which includes an essay, a presentation and a combination interview and article discussion.

“My presentation was over how I bring joy to others,” Kort said. “I was the mascot at my junior high school and was the captain of the spirit squad in high school. I showed a PowerPoint of all the crazy things I did throughout my life that were attempts to bring joy to people.”

For most Harter competitors, nerves are on high for the entire day.

“When I first arrived on campus that morning, I was terrified,” sophomore and 2016 recipient Caroline Birt said. “I continued to be terrified until [senior] Madeline McCrary offered to take me on a tour in-between sessions to get my mind off of it. It was actually the first time I visited the campus, and during that tour is when I fell in love with Baker and decided I wanted to come here.”

Senior Amy Wysong was one of the two Harter Scholars named in 2014. Though she does not remember much about her competition day specifically, she does remember “stress-eating a lot of cookies.”

Following the competition, where she presented on what she wanted medicine to be and how she was going to practice medicine, Wysong immediately left for a medical mission in Haiti.

“I think being the Harter Scholar set the tone for my Baker experience,” she said. “As soon as I got the phone call that Baker was awarding me the scholarship, I had a tiny breakdown because Baker trusted me enough to fund my undergraduate education. I hope I have succeeded in living the mission that Baker builds because Baker definitely has built who I am.”

In addition to the full-tuition scholarship that these students receive, each recipient is given the opportunity to spend a semester abroad.

“I had never considered studying abroad before receiving the Harter Scholarship,” Wysong said. “The Harter allowed me to study abroad at the University of St. Andrews in Scotland. While I was there, I embraced each opportunity I could, discovering even more about myself while exploring the world.”

Since its inception, the Harter Scholarship has been funded through a gift started by Edward and Sylvia Harter. Though they both did not attend Baker, they provided Baker with an endowment for student scholarships because of Baker’s generosity in continuing Missouri Wesleyan College’s legacy following its closing.

The competition for next year’s entering class of students took place on Nov. 18. The two recipients of the Harter Scholarship will be announced upon their acceptance of the award.