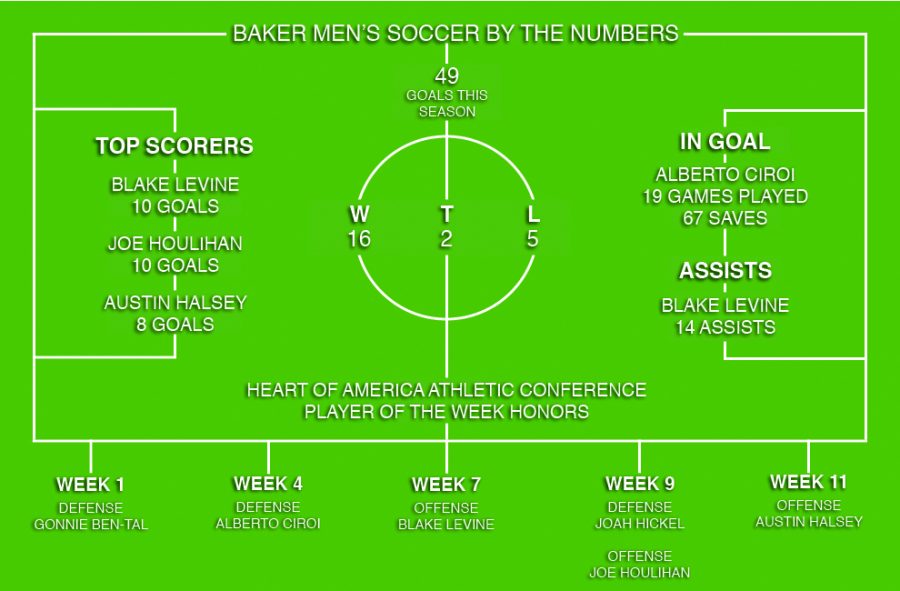 The Baker men’s soccer team’s season came to a close Monday after a 1-0 loss to Columbia College in Delray Beach, Florida.

With the loss, the Wildcats end their season with a 16-5-1 record, while the Cougars improve to 19-2-2 and advance to the National Quarterfinals to take on Wayland Baptist (Texas).

The ‘Cats defeat is reminiscent of the end of their 2015 season, where the Cougars upset Baker in the second round of the NAIA Men’s Soccer National Championship with a 2-0 shutout.

It proved to be a defensive game for Baker from the start with Columbia tallying 11 shots in the first half compared to the Wildcats three. Matija Ceraj led the attack for the Cougars with seven shots total in the game, his most of the season.

Freshman goalkeeper Alberto Ciroi maintained composure in goal for the Wildcats with two saves in the first half, keeping the game scoreless after 45 minutes.

The ‘Cats were able to get two shots on goal in the first half, but both were saved by 2017 American Midwest Conference Player of the Year goalkeeper Nicolau Neto for Columbia. Neto played all 90 minutes for the Cougars, earning the shutout.

The two shots on goal for the Wildcats were provided by senior team captain Blake Levine and sophomore Joah Hickel.

In his last collegiate soccer match, Levine felt the pressure of the game and knew he was more nervous than a regular season game.

“The pressure of having to win or your college career is over is a lot to deal with,” Levine said. “But I love playing in big games, and I think I thrive in those situations.”

In the second half, Columbia continued its offensive pressure, resulting in the lone goal of the match from Aaron Noel assisted by Adam Du Toi in the 53rd minute. The goal came from a free kick outside the box, allowing a one-touch shot from Noel. Noel led the team with 3 shots on goal.

Despite desperation, the Wildcats were only able to manage four shots in the second half.

“Columbia was a lot better team than I thought they were going to be,” Levine said. “I thought their defense was their strongest position, because they were all athletic and good technically.”

In the last minutes of the game, a chance from junior Joe Houlihan fell short as he collided with the goalkeeper, resulting in his second yellow card of the match. After 90 minutes, the Wildcats fell to the Cougars 1-0, ending their tournament run and season.

“For the team, playing in a different environment than we’re used to takes a little time getting used to,” Levine said. “But at the end of the day both teams had to deal with that, and on Monday, Columbia dealt with it better than we did.”

The Wildcats will say goodbye to ten seniors including starters and long-time team members.