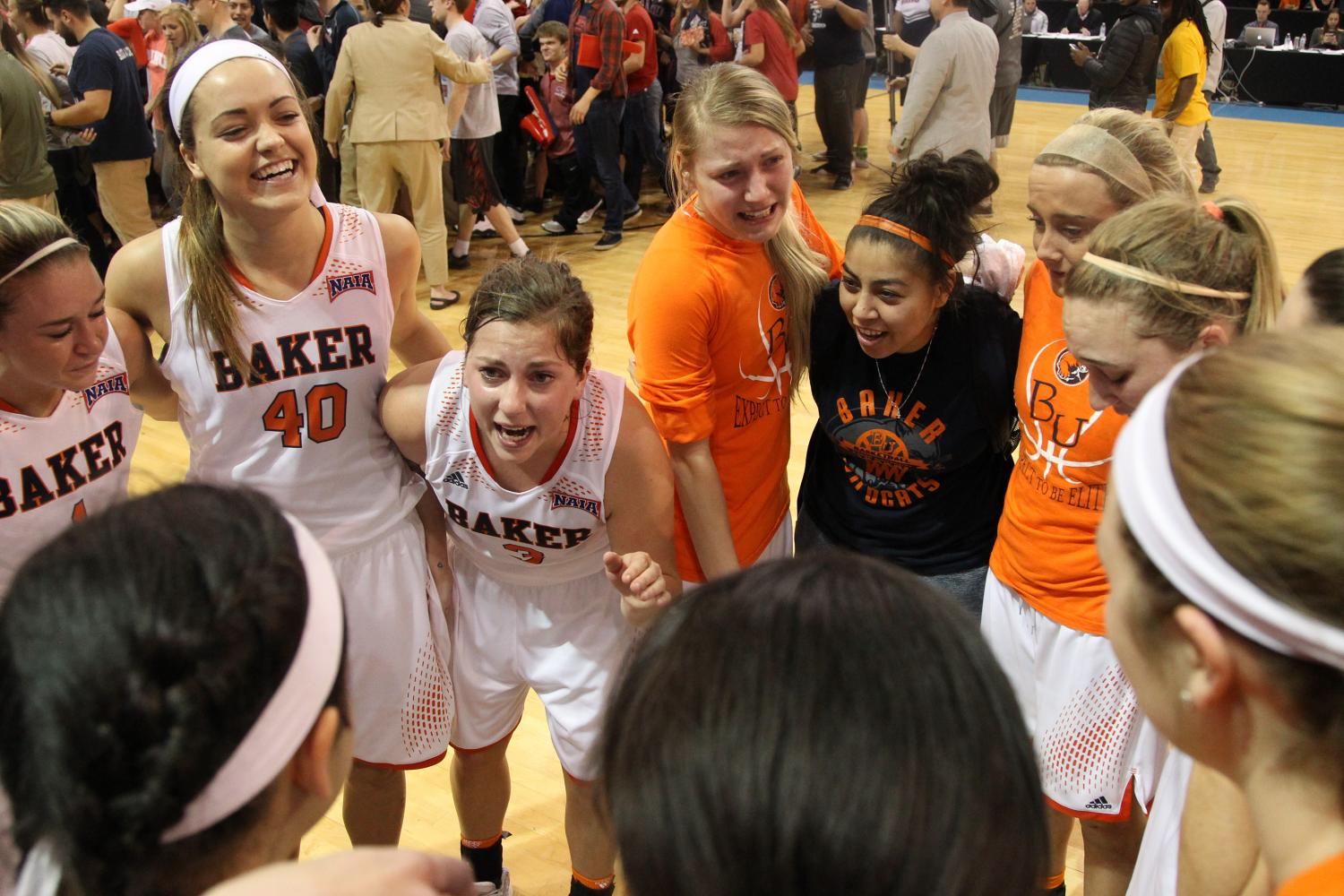 Senior Ericka Simpson gathers the team together one last time after a tough 49-35 loss to rival MNU in the NAIA title game on March 22, 2016, at the Silverstein Eye Centers Arena in Independence, Missouri. Following the women’s basketball team’s success all the way to the championship game was a fun ride, and it was unfortunate to see them fall one game short. However, when everyone rushed the court after the semifinals win against Benedictine to go to the title game, it was certainly a top Baker sports moment.

The Baker women’s basketball team opened up Heart of America Athletic Conference play with a 68-61 win over Avila Wednesday night inside the Collins Center.

The game got off to a slow start with the score tied at 2-2 after three minutes of play.  After trading the lead back and forth, the Wildcats trailed the Eagles 11-10 after the first quarter.

The ‘Cats found their stride in the second quarter, outscoring Avila 26 to 12.

Sophomore Jodi Adkins led the Baker offense with 18 points, going 7-11 in the paint.  Junior Jesse Zweifel and Caitlin Modesett also scored double digits for the Wildcats with 15 and 12, respectively.

On the defensive end, senior Courtney Hoag shut down the Eagles with eight blocks and eight rebounds. Hoag also assisted the offensive effort with eight points.

Avila cut down the lead at the end of the third quarter, outscoring the Wildcats 21-15.

In the fourth quarter, the Eagles trailed by just three with six minutes left to play in the game.

After a big three-pointer by Adkins, the Wildcats regained a comfortable margin and maintained the lead for the remainder of the game.

With its first victory of the conference schedule, the women’s basketball team is now 1-0 in the Heart and 7-2 overall. The Wildcats currently sit in third in the Heart conference standings early in the season. Mid-America Nazarene University and Missouri Valley College occupy the first and second spot in the standings with only one loss each.

The ‘Cats will now travel to face Culver-Stockton at 2 p.m. on Saturday, in Canton, Missouri. The Wildcats defeated Culver-Stockton in both meetings in the 2016-2017 season.