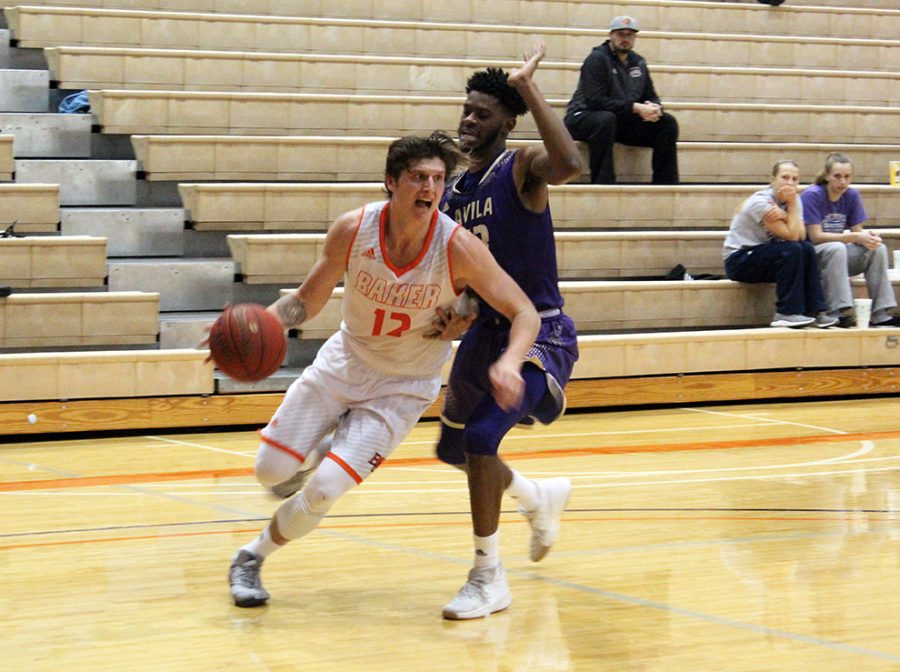 Senior Nate Guscott drives to the basket against an Avila defender inside Collins Center on Wednesday. The Wildcats won the Heart opener 85-65 and Guscott led all scorers with 18 points.

Despite an early two-pointer from Avila’s Dominique Washington, the Eagles trailed the remainder of the game after Baker’s Daniel Young tied the game less than two minutes in.

Senior Nathan Guscott led the offense with 18 points and 6 assists. Sophomore Brett Elifritz followed close behind with 17 points of his own, going 7-7 from the field and 3-3 for three-point distance.

The Baker men’s basketball team wasted no time extending its lead, leaving Avila to trail 41-25 by the start of the second half.

The Baker defense also forced 13 turnovers, with the effort beign led by Guscott who totaled seven forced turnovers in the game.

The Wildcats will look to extend their win streak on the road as the face Culver-Stockton at 4 p.m. on Saturday in Canton, Missouri.

In the team’s two meetings with Culver-Stockton last season, Baker defeated the Wildcats 91-82 and 82-74.

Baker will have a defensive battle ahead of them as Culver-Stockton ranks No. 9 in Division I blocks per game and No. 10 in total blocks.