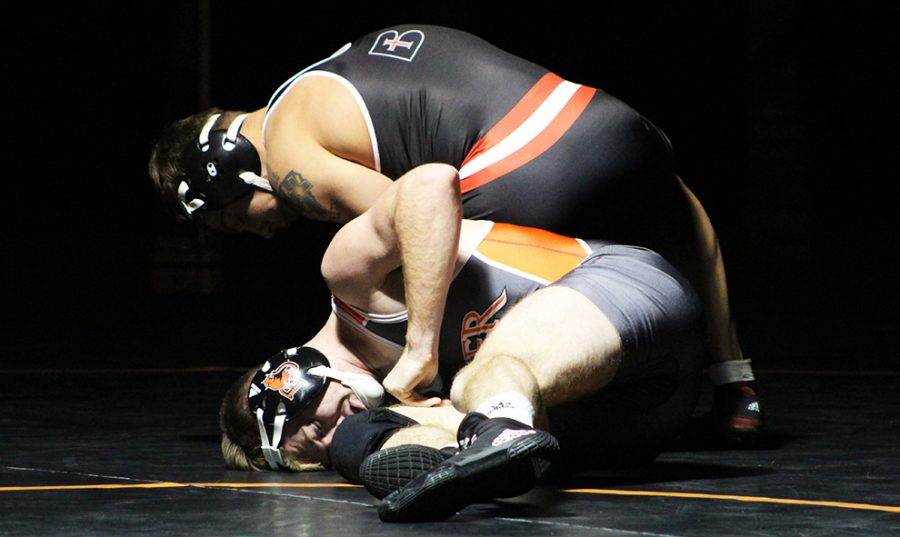 Baker's Colby Johnson takes on Benedictine's Austin Roper in the 149-pound match up. Baker defeated Benedictine with a score of 34-19.

The Baker University wrestling team earned two first-place victories in hosting both the Graceland Dual and Benedictine Dual inside the Collins Center this past week.

The Wildcats first opened their season by defeating the Yellowjackets 24-20. Baker started the dual with three straight losses in the 125-pound, 133-pound and 141-pound matches.

With four matches left, the Wildcats trailed late in the Graceland Dual. Two Baker sophomores and two seniors rallied against the Yellowjackets earning the victory for the ‘Cats.

Reigning NAIA All-American David Dow pinned DeMarco Mosley in just 24 seconds in the 197-pound match earning Baker’s third win in a row. Senior Kyle Atwood defeated Ryan Paige in a 7-2 decision in the 185-pound match, earning the Wildcats last win of the night and topping Graceland to earn the victory in the home dual.

The ‘Cats took on Benedictine in their second dual of the week, defeating the Ravens 34-19.

Benedictine left the 125-pound and 133-pound slot open, allowing Baker to take an early lead in the dual.

The Wildcats ended the dual with four victories, including one open slot that Benedictine left in the 197-pound match.

Lovvorn pinned Benedictine’s Kaleb Mitchell in 26 seconds in the 175-pound match. Sophomore Jacob Smith won on a 12-3 major decision against Anthony Mabery and Dow pinned Jordan Favela in 1:27 in the 285-pound match.

After two first-place finishes in duals at home, the Wildcats will now prepare to travel to the Doane Open on Saturday in Crete, Nebraska.