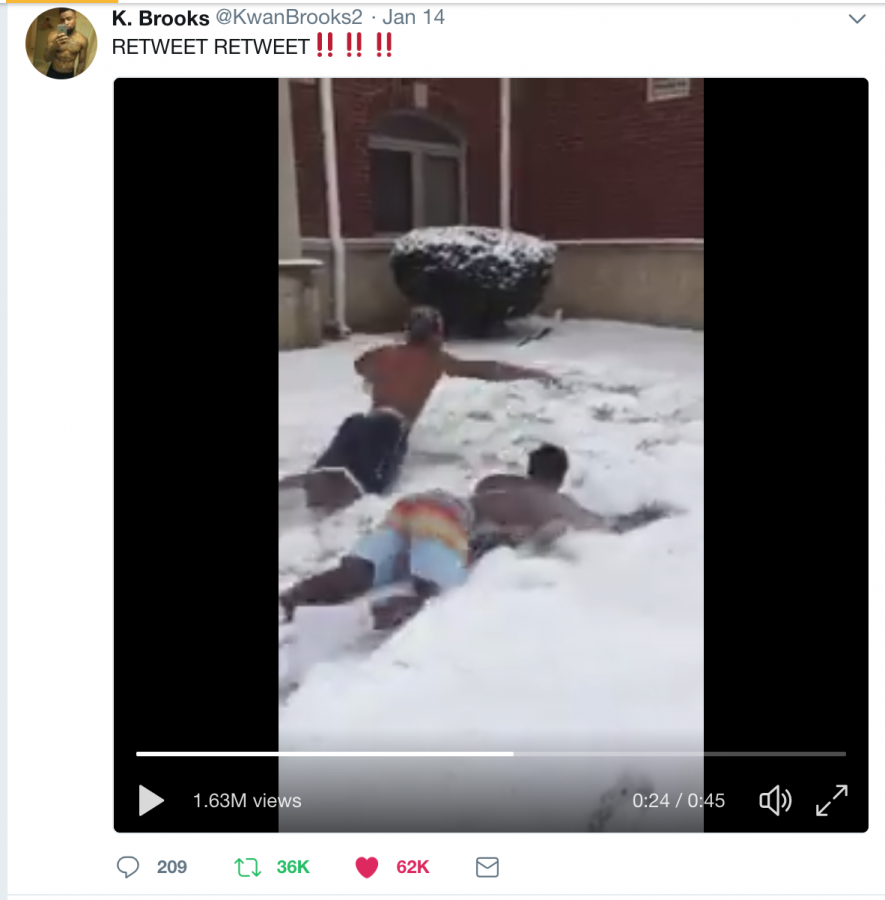 Sophomores Kwan Brooks and Fabien Franck-Love, natives of Georgia and California respectively, enjoy the rare sight of snow. The video of them “swimming” in the snow had 1.63 million views. Screenshot via Twitter.

While snow in January is common, making a sport out of it is much more unique. Baker University sophomores Kwan Brooks, Fabien Franck-Love and Deverius Brown took playing in the snow to the next level.

Across the country, videos of students “swimming” in the snow have become increasingly popular. Brown was the one to bring the idea of creating their own version to the group.

“I showed him a video, and they were just like ‘Let’s do it!’” Brown said.

On Jan. 14, the group created a video compilation of their “swimming” experience.

“There were actually parts to the video, but we put them together,” Brown said.

In the video, Brown is behind the camera commenting while Brooks and Franck-Love act out their best swim moves while wearing only shorts and long socks.

Surprisingly, their show didn’t gain a crowd, but the group did catch the attention of the local churchgoers across the street.

“There were some church people walking out while we were swimming,” Brooks said.

Brooks was the one to post the video on his Twitter page with the caption of “RETWEET RETWEET!! !! !!” and he was not disappointed. The video was quickly shared by a multitude of people from across the country and currently has more than 1.5 million views, and it’s still being shared.

The video was also featured on 41 Action News, Reddit and Bleacher Report. The group expected the video to be spread around campus but had no idea how big their video’s popularity would get.

“I said, ‘We can go viral from this,’” Brooks said, meaning on Baker’s campus, not the entire country.

Despite swimming in the snow, Brooks and Franck-Love didn’t get sick. They took some DayQuil and went about their day.

The three sophomores are now focusing on their track and field careers instead of snow swimming, but that hasn’t stopped their Interterm fun from gaining viewers.