Russia: A threat to Americans 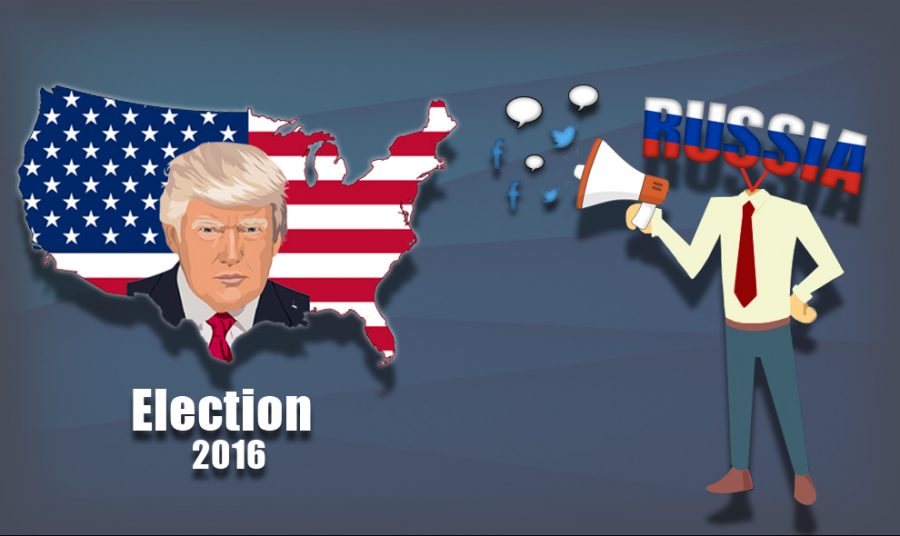 Russia is a country synonymous with corruption, collusion and President Donald Trump.

Russia has been the number-one news story for more than a year when doubts were first raised about Donald Trump’s alleged connections to the country and its autocrat leader, President Vladimir Putin.

But, the influence of Russia spreads far beyond the alleged connections between Putin and Trump, as U.S. Intelligence agencies have confirmed there is evidence of Russian influence on the 2016 election.

However, one thing news organizations have failed to do is convince all Americans that Russian interference in our democratic system, at any level, is an extreme breach of national security and one that needs to be addressed.

By examining the extent to which Russian agents infiltrated American confidence in the democratic system and analyzing the implications of the Russia investigation without the political pomp, Americans can begin to reconcile with this intrusion of America’s democracy. Increased attention to the issue will allow a national debate, something desperately needed given the current political climate.
Russian Influence in the 2016 Election
Even though Russian influence in the 2016 election has been venomously denied by both the president and Russia, U.S. Intelligence agencies all agree there is strong evidence to support that claim.

A report released by these agencies details the extent to which Russia hacked the election.

The report states “high confidence” in the assertion that “Russian President Vladimir Putin ordered an influence campaign in 2016 aimed at the U.S. presidential election.”

It continues by stating the goal of this mission was to “undermine public faith in the US democratic process, denigrate Secretary of State Hillary Clinton and harm her electability and potential presidency.”

To discredit former Secretary Clinton, the Russian government gained access to several local electoral boards and used a propaganda machine to spread false information and doubts to the American people, mainly through social media sites like Twitter and Facebook.

The sheer fact that we have the knowledge of this happening, of a foreign power run by a ruthless autocrat who cares not about the United States nor the values it stands for, and we are doing almost nothing to correct this situation is astonishing.

Many Americans don’t understand the severity of the Russian influence. Russia influencing our democracy means they may have elected a man who more likely than not will be easily manipulated. A weakened executive branch could have serious international consequences as Russia would have virtually no one to oppose them over things like Crimea and other such violations.

However, the most insidious thing this has done to Americans is that it has weakened our faith in the democratic system and cast doubt on our elections and our country.

Russia has always attempted to level the moral high ground and demonstrate to their citizens and the world that Russia and the United States are the same and not one way of government is better than the other.

While there are serious and systemic issues we as a nation need to address, we should not let a hostile foreign power dictate how we run our country.

This act committed by the Russians is a serious offense and one that needs to be addressed swiftly by our government and the international community. If we let Russia’s misinformation campaign further influence our political system then they can take those strategies to other countries that threaten them and thus elect pro-Russian officials who will not question Putin’s autocratic rule.

Finally, a recent opinion piece in The New York Times pointed out that Trump is the first president to fail to respond to an attack on our democracy by a foreign power and the first to also resist an investigation of the attack.

For the sake of not getting complicated in the politics of the current investigation of possible collusion with Russia, I will only state the inherently suspicious nature of that action. If he has nothing to hide, then why resist an investigation?
The Russia Investigation
The other major piece of the Russia story is the investigation by special counsel Robert Mueller. He is looking into the ties between the Russian government and the Trump campaign to see if there was indeed any collusion.

While there is a current divide between Americans on whether or not this whole story is a smoking gun and should get Trump impeached, it is in my opinion that every American should understand what the investigation has uncovered so far, and the shocking role Russia did play in the 2016 election.

So far, Paul Manafort, the chairman of the Trump campaign, and George Papadopoulos, a campaign adviser, were both found guilty by the FBI. Manafort, along with his former business associate Rick Gates, was found guilty of conspiracy against the United States and money laundering. Papadopoulos on the other hand plead guilty to lying about his Russian contact to the FBI. All of this information came to light due to the investigation by Mueller.

Now, these charges prove some negative things about Trump and his ties to Russia. Firstly, two high-ranking members of his campaign staff had connections to Russian officials and did everything in their power to cover up those connections. There is serious doubt that Trump knew nothing of these crimes, given their high-ranking positions, but even if we give him the benefit of the doubt, not knowing these things were happening in your own campaign staff shows gross incompetence in management.

Moreover, there is some serious suspicion when taking a closer look at the meeting in Trump Tower that took place on June 9, 2016. The meeting was between trustee of the Trump Organization Donald Trump, Jr., Senior Adviser to the President Jared Kushner and Manafort with Russian lawyer Natalia Veselnitskaya and a Russian lobbyist, Rinat Akhmetshin. The meeting is supposed to have taken place to discuss “information that would incriminate Clinton and her dealings with Russia.”

If the reason this meeting took place was to get incriminating information from the Russians about a political opponent, that is a crime. Allowing a foreign power to sway a domestic election is a gross lapse in judgment at best, and a serious and incriminating action at worse. Although the fact that Paul Manafort, a convicted criminal, was present for a meeting with Russians is enough to raise a few eyebrows.

Furthermore, there is the strange and sudden firing of former FBI Director James Comey, and not to mention the recent news that Trump attempted to fire Mueller, so he could no longer investigate the Trump campaign’s ties to Russia. Even if there are no ties, as Trump claims, why would he fire people who were investigating these ties? A man who has nothing to hide would not attempt to block such an investigation, and both of those firings could be obstruction of justice.

All this information is not even the tip of the iceberg. There are new details emerging every day it seems and it’s getting painfully apparent that this news is a big deal Americans need to begin treating it as such.

Even if after the dust settles and Trump truly does not have any ties with Russia, there is still evidence that Russia influenced our democracy and he has done nothing to address that.

America needs to process this information and see this story without all the political frills and come to terms with it for what it really is. Russia infiltrated our election, made us doubt our democratic system and further widened the gap between Americans. We need to have a national conversation and act, united as Americans, against this foreign threat before it becomes too late.