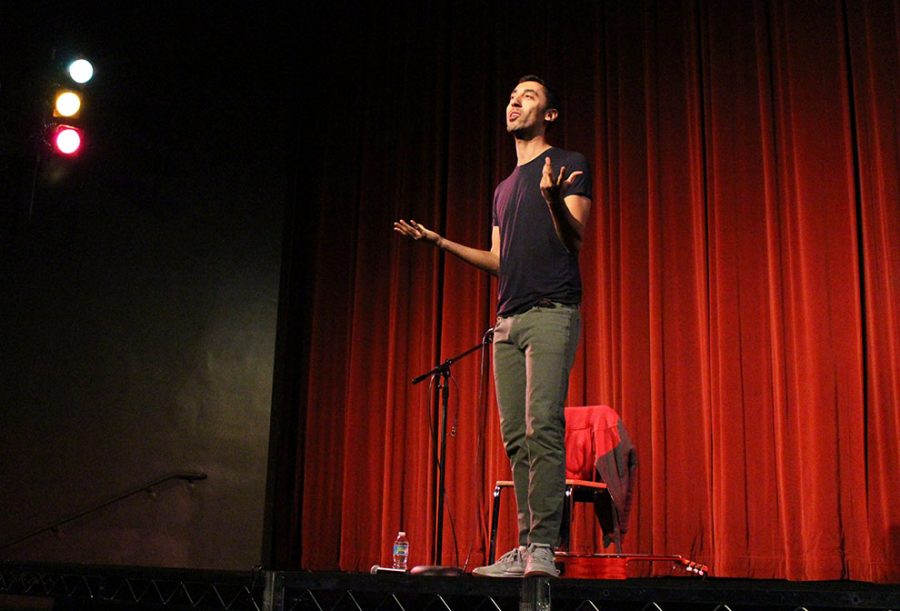 Comedian Morgan Jay performs in Rice Auditorium on January 31. Jay performed comedic original songs on his guitar and has previously been on Jimmy Fallon.

To start off the spring semester, Baker’s Student Activities Council brought in comedian Morgan Jay to perform on Jan. 31 in Rice Auditorium.

Free to all students and faculty, Jay entertained the audience with a mix of sexual humor and original songs. His quick gestures and guitar skills captured the attention of his audience and incited a lot of laughter.

“Morgan Jay was definitely unique,” Hassenstab said. “He used both his talents of singing and comedy to provide a wonderful interactive performance that made me laugh the whole way through.”

Jay started his show with technical difficulties but overcame the issue by projecting his voice without a microphone for the first part of his performance.

Through jokes about dating, adulthood and his life back in Los Angeles, Jay was able to connect with the audience and their everyday lives. With each new topic, Jay used crowd interaction to hold the audience’s attention. Jay asked audience members about personal relationships, gave them advice and even brought himself into the crowd by climbing over seats and running up and down the auditorium aisles.

Freshman Brett Baker is a member of SAC and thought Jay was a good fit for a college audience.

“With his songs and jokes geared toward sex and love he puts it all together with his great personality.” Baker said.

Jay played songs called “Split The Check,” “Dot, Dot, Dot” and more during his performance. These unique renditions illustrated common relationship issues and many are featured on Jay’s album on iTunes called “Love Songs… or Something Like That.”

After his performance, Jay encouraged students to come up and talk to him or look at his merchandise.

Jay said he enjoyed talking to the students and was excited about how the show went.