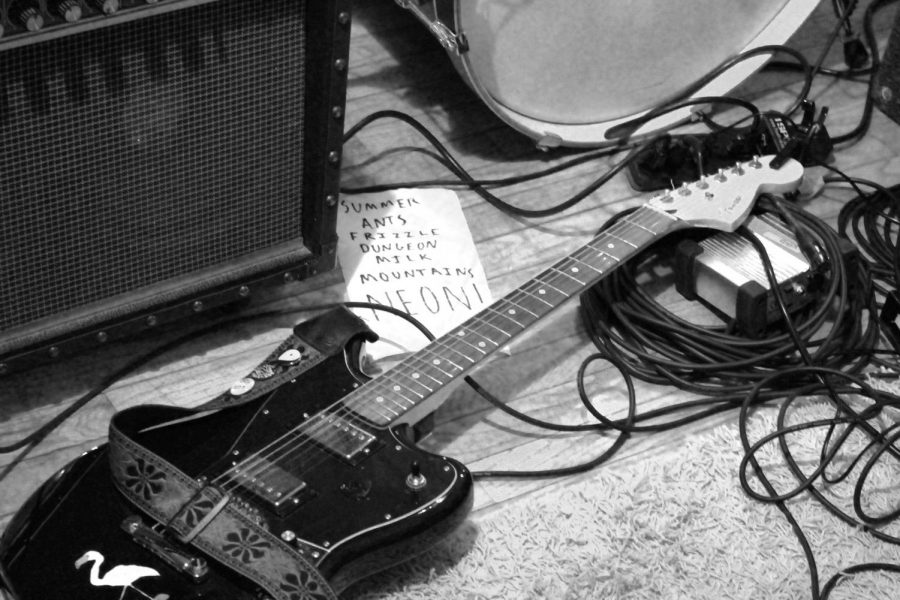 Freshman Tre Byers' guitar next to the night's set list. Byers and his band Dodging played a 30 minute set at a house show in Lawrence on Feb. 3.

1. An unidentifiable scent that might be incense, you aren’t really sure, but you don’t hate it.
2. A gaggle of people that are definitely way cooler than you, preferably wearing a cool hat.
3. A makeshift bathroom sign.
4. DIY “curtains” aka tablecloths, sheets and blankets taped to the windows to keep the light from going out or coming in.
5.  Great music.

This time-honored musical tradition is a way for artists to play for friends in the comfort of their living room or basement.

Last Saturday, I found myself at a house show – something I never expected I would attend in Kansas. This show checked all the boxes on my list and introduced me to a new world of music right down highway 59.

At first glance, this vibrant Lawrence musical scene may seem to be promoted by the University of Kansas students. I made that assumption, but I was proven wrong.

Since 6th grade, Byers has been interested in music. He played the viola in the school orchestra and then picked up guitar two years later. After learning to play the guitar he began writing songs.

“I don’t like to talk about things. I talk about it through music,” Byers said.

Songwriting is cathartic for Byers, who will often write about himself, calling his music “confessional”. His song “Milquetoast”, pronounced milk-toast, is about personal intellectual insecurities.

“We were all just kind of like-minded people who happened to meet at the right time,” Byers said.

Dodging has a distinct sound that started with a distinct vision. The original idea was to be a rip-off of the indie-rock band Real Estate. This quickly shifted into a desire to “be something different” Byers said. They decided to be unique and make something new.

“I want to bring influences from a lot of different things, but I do not want to be categorized as just one specific thing,” Byers said.

As a band, they wanted to put music out from the “get-go”. They currently have three songs on Bandcamp and hope to put out more, eventually producing an album.

While there are producers in Lawrence and Kansas City, Dodging and many other Lawrence musicians have completely internal operations, meaning they run their own production and publicity.

“There is a big emphasis on ‘DIY’ and doing everything yourself,” Byers said.

That ‘DIY’ attitude has lead to them recording their own music in living rooms and basements, posting on Bandcamp and playing house shows.

Saturday’s house show was Dodging’s third and was hosted at its home base. The show featured three other groups; Toughies, Wesley Jensen & The Penny Arcade and No Magic.

I brought along some friends and fellow Baker Orange staff members with me to the show, including freshman Liam Barnsby and Photo Editor Jenna Black. Black and Barnsby had never been to a house show and didn’t know what to expect.

“I was really intrigued as to what it would be like,” Black said. “As we walked in the house I could really feel the vibe.”

A vibe that Barnsby, also a friend of Byers, really enjoyed.

The opening act of the show was the more relaxed, local Lawrence folk singer No Magic, but when Dodging came on, Black said, “they really amped up the excitement in the room and it just took off from there.”

Dodging’s unique indie-rock sound creates a fun and freeing atmosphere at shows. All band members except Allen had their turn at the mic as lead vocalist. While Byers writes and sings his own lyrics, VonHolten and Limesand normally improvise their vocals.

Much of Dodging’s set was formed through spur-of-the-moment calls, creating a free-flowing feeling to the performance. The band’s chemistry and connectivity translates into their music.

“These people are my best friends,” Byers said. “I wouldn’t have it any other way.”