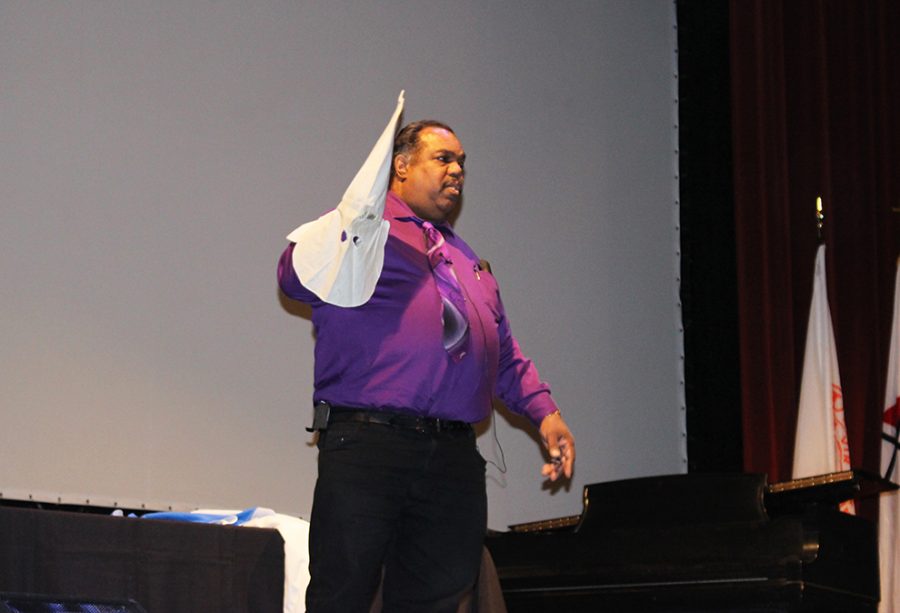 Daryl Davis delivers a speech about his experience of convincing members of the Ku Klux Klan to disband from the organization. The presentation was hosted by Student Activities Council and was held in Rice Auditorium on Feb. 6.

Not many black men can say they have attended Ku Klux Klan rallies as a guest of a member of the organization, but Daryl Davis can. At age 10, Davis had never heard the word “racism”. He had moved around to various foreign countries with his parents and had always been around children of other races and cultures.

When he got to the United States, Davis joined the Boy Scouts of America organization in Baltimore, where he was the only black child.  Slowly, he began to realize his race was treated differently in America.

Davis became acquainted with members of the KKK through his performances as a musician, and he spoke about these experiences on Wednesday in Rice Auditorium to Baker students and faculty.

Mungano and the Student Activities Council were crucial in bringing Davis to campus to tell his story.

“In this day and age diversity is just a huge issue making sure that equality is addressed” senior Catey Payne, a member of SAC said. “So, I mean we have such a diverse campus that we want to not just have events that are more entertainment.”

His presentation discussed hate and ignorance, which has been a constant issue in the United States.

Throughout the presentation Davis repeatedly said, “how can you hate me if you don’t even know me and for the last 50 years I have looked for that answer.” This saying was how Davis described his approach to the topic of hate.

Davis continuously mentioned that ignorance breeds fear, fear breeds hate and hate breeds destruction. It is important to fight ignorance through peace, Davis said, and that has been his platform for fighting racism.

In addition to finding answers, Davis is a professional Jazz musician and has been in various bands throughout his career. It was through his music that he became connected with members of the KKK back when he was playing country music at the Silver Dollar Lounge in Maryland.

At the lounge, he befriended a man involved in the white supremacist organization who would later renounce his membership and connect Davis with then KKK Imperial Wizard, Roger Kelly. An Imperial Wizard is a national position in the KKK.

Kelly was a leader in the KKK before befriending Davis, which helped Kelly to look past his hate and change his “concrete” mindset about race.

Davis’ secret to helping the members see his point of view is by allowing them to recognize the unnecessary hate they have toward people they do not know.

Ultimately, Kelly left the KKK and was the first person to hand over his robes to Davis. At the presentation Davis pulled out Kelly’s white robe and white hat.

“When two enemies are talking, they’re not fighting,” Davis said in a interview with The Daily Mail.

This remained true when he spoke Tuesday about how powerful words and face-to-face conversations can be when fighting ignorance.

The importance of peaceful face-to-face conversations is the way to understanding another person, according to Davis. He preached on the power of these interactions that have led him to help end Ku Klux Klan membership of approximately 200 individuals.

“I did not respect what Roger Kelly had to say, but I respected his right to say it,” Davis said.

Davis continues to prompt others to join his fight in peaceful understandings.

“I’m just a rock and roll musician. My degree is in jazz,” Davis said. “If I can do this anyone can.”

For more information on Davis, visit his website at www.daryldavis.com or watch his documentary called Accidental Courtesy, which can be found on Netflix.