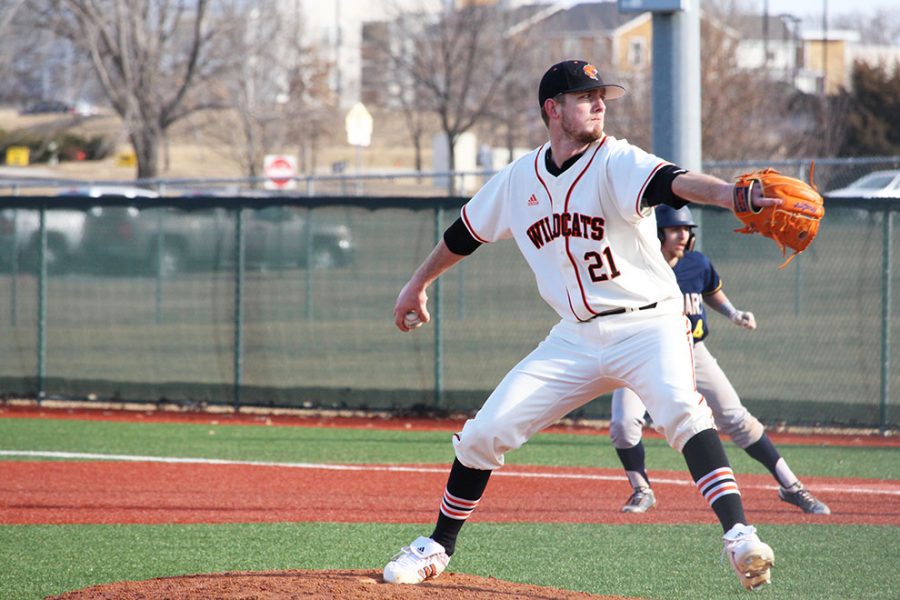 Sophomore Ryker Johnson, the starting pitcher in the second game, winds up for a pitch in the first inning. This was Johnson's first game pitching for the Wildcats.

The Baker University baseball team began the 2018 season in a doubleheader against University of Saint Mary played at Lawrence Free State High School. Saint Mary took down Baker 10-8 and 14-5.

The first game of the doubleheader saw five different Baker pitchers. Junior David Tudhope started the game on the mound for the Wildcats. After the first inning, Baker led Saint Mary 2-1 after a two-run home run by junior Wyatt Logan.

Saint Mary took back the lead in the third inning, scoring two more runs. However, the Wildcats scored three more runs of their own in the fourth, making it 5-3. Both teams earned a run in the fifth inning. The top of the seventh inning saw six runs for Saint Mary, and Baker was unable to recover in the bottom of the seventh, only scoring two runs off a sophomore Dillon Prokop home run. Baker fell 10-8.

Zack Novis struck out four Baker batters during his 5.2 innings pitched. Saint Mary’s final pitcher Mike Amado got the win for the Spires and junior Andrew Reich recorded the loss for Baker with six runs scored off of him.

Sophomore Cooper Karlin went 3-3 at bat in game one, and juniors Wyatt Logan and Max Taulbee and Prokop all recorded two RBI’s each.

The Spires got an early lead, scoring five runs in the second inning. Former Wildcat Dylan Carrender hit a grand slam on a 0-0 count for Saint Mary. The Wildcats answered back with a three-run home run by senior Sean Beal on a 0-0 count. Both teams then scored another two runs each in the third inning, leaving Baker trailing 7-5. However, Baker did not score another run and Saint Mary added seven more.

Starting pitcher for the Spires Matt Weis earned the win, and junior Will Edwards recorded the loss for Baker. Edwards and senior Jack Mayes each struck out three Saint Mary batters.