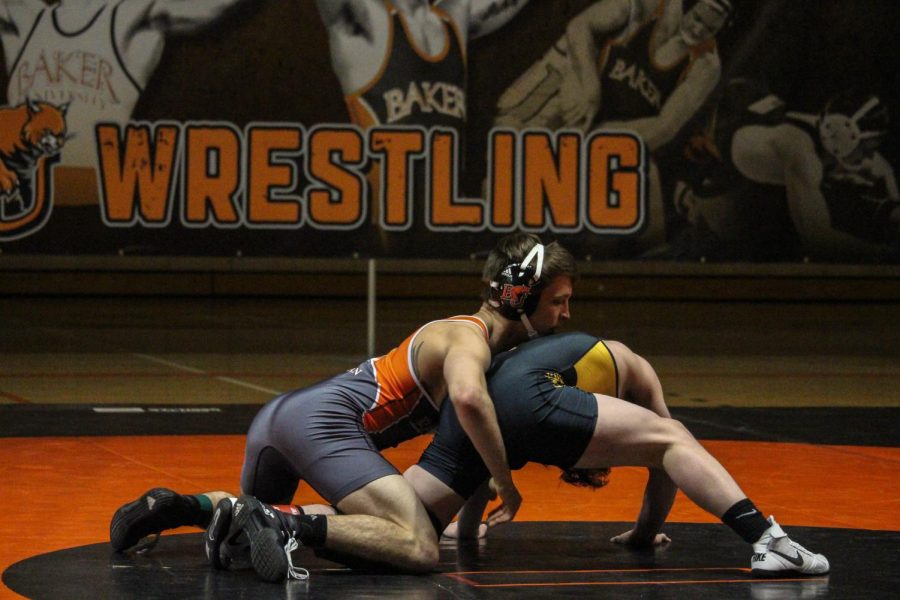 Tyler Dickman, a junior in the 141 pound weight class, scores a takedown as the Wildcats take on Ottawa for Senior night.

The No. 15 Baker University wrestling team won its last two duals before heading into the Heart of America Athletic Conference Championships. To end the year, Baker defeated Drury University, an NCAA Division II program, on Dec. 31. Then in their first dual of 2018, the Wildcats took down Ottawa University.

Senior Kyler Atwood picked up a win in the 197-pound weight class as Ottawa didn’t have a wrestler in that bracket. Junior Zane Baugh defeated his opponent in the 125-pound dual by fall in 2:44. Junior Tyler Dickman, freshman Colby Johnson, freshman Tyler Price, sophomore Lucas Lovvorn and sophomore Jacob Smith all won their duals by fall as well for Baker.

The seniors recognized at the dual were Atwood, Zachary Balden, Bryant Guillen and John Hughes. In the seniors’ time at Baker, team highlights include second place in the Central Region in the 2016-17 season and sixth place at nationals in 2015-16. Individually, Atwood qualified for nationals during the 2015-16 season and Guillen took sixth place at nationals in the 2014-15 season, earning him All-American status.

The wrestling team traveled to Springfield, Missouri, to take on the Drury University Panthers. Baker won 26-18.

The night began well for Baker, as the Wildcats took the first four duals of the night. Freshman Dylan Pelland, junior Zane Baugh, junior Tyler Dickman and freshman Colby Johnson all won in their respective weight class to get Baker on top to start the dual.

Lovvorn defeated Drury’s Jacob Brune by a 1-0 decision in the 174-pound weight class. The last win for Baker came from sophomore David Dow, who won the 197-pound bout by fall in 4:22.

The Wildcats will now host the Heart of America Athletic Conference Championship starting at 9 a.m. on Feb. 17 in the Collins Center. This will be an opportunity for wrestlers to qualify for the NAIA Wrestling National Championship, which will take place March 2-3 at the Jacobson Exhibition Center in Des Moines, Iowa.