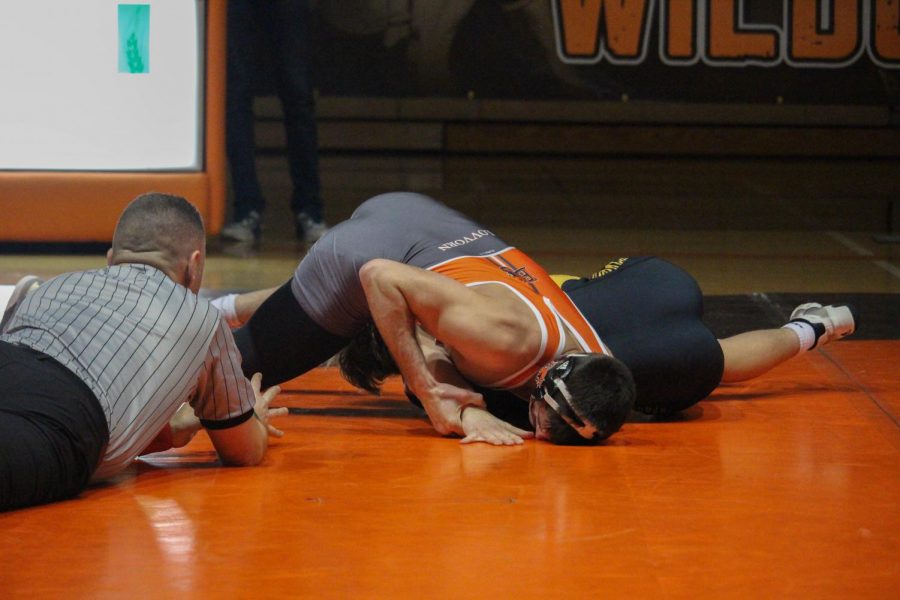 Sophomore Lucas Lovvorn works for a pin in his matchup against Ottawa. Lovvorn took first in the 174-pound bracket at the Heart of America Athletic Conference Championship, earning him a spot at the national tournament.

Five Baker wrestlers qualified for the 2018 NAIA Wrestling National Championship as the Wildcats hosted the Heart of America Athletic Conference Championship on Saturday.

Other Wildcats who qualified for nationals include freshmen Dylan Pelland and Colby Johnson and sophomores David Dow and Jacob Smith.

Pelland finished in fourth in the 125-pound bracket. Dow finished in third place in the 197-pound bracket over Dickinson State’s Cody Johnson in a 13-12 decision to qualify for the national tournament.

Johnson and Smith each ended the day with second-place finishes in the 149- and 184-pound brackets, respectively. Johnson fell in the championship match to Grand View’s Devin Reynolds in an 11-2 major decision. Smith took on No. 2 ranked Artie Bess of Grand View in his final match of the day that ended in a fall after 1:29.

Smith and Dow both qualified for the national tournament last season, and Dow earned All-American honors with an eighth-place finish.

As a team, Grand View took the top spot with 211.5 points. Baker finished in fourth place with 108.5 points.