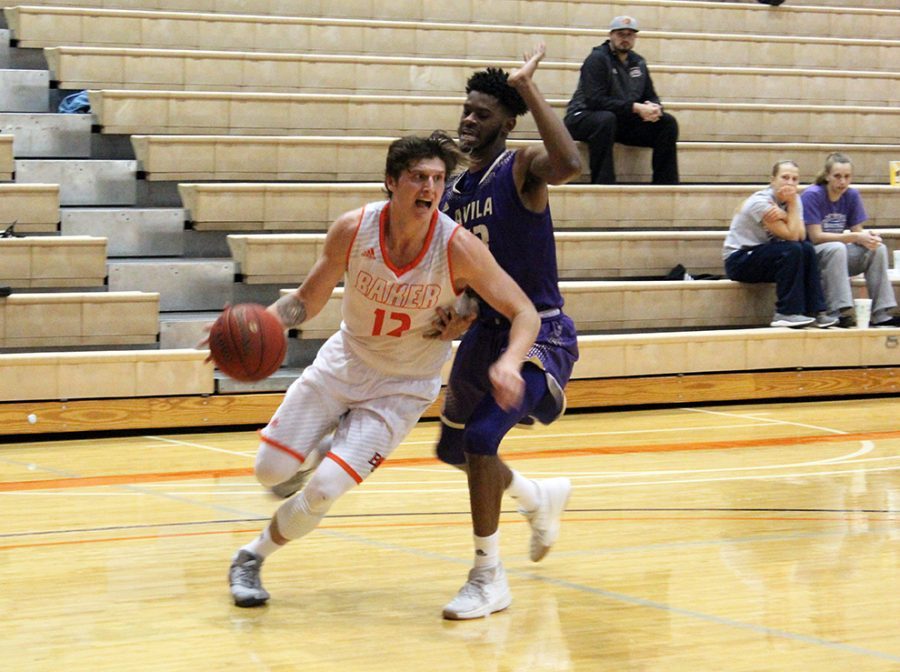 Senior Nate Guscott drives to the basket against an Avila defender inside Collins Center in the teams' earlier matchup. Baker defeated Avila 71-60 on Feb. 17.

The men’s basketball team earned its third-straight Heart of America Athletic Conference win on Saturday. The Wildcats took down Avila 71-60 in Kansas City, Missouri. This leaves Baker at 12-13 overall and 6-11 in Heart play with just two games remaining in the regular season.

The Wildcats started the game strong with a 14-2 run in the first 7:30 before Avila called a timeout in an attempt to regroup. Baker headed to the locker room at halftime up 35-31 before extending to a 20-point lead in the middle of the second half. The Eagles were able to shorten the lead, but it wasn’t enough as the ‘Cats finished 71-60.

Senior Stephen Edwards led the ‘Cats offensive effort with 22 points. Edwards went 8-13 from the line and shot 50 percent from the field. Senior Nathan Guscott contributed 16 points and five assists for Baker. Senior Tyree Peter had a double-double with 12 points and 16 rebounds marking his ninth double-double of the season. Peter’s performance earned him the Heart Player of the Week honor.

As a team, Baker shot 51.2 percent from the field and held Avila to just 36.1 percent. Baker also out-rebounded Avila 41-21, which included 36 defensive rebounds to keep the Eagles from having many second-chance opportunities on offense.

The Wildcats will take on Evangel at 7:30 p.m. on Wednesday in Springfield, Missouri. Evangel currently stands at 7-21 overall and 5-12 in the Heart. Baker fell to Evangel 78-72 at home earlier in the season.