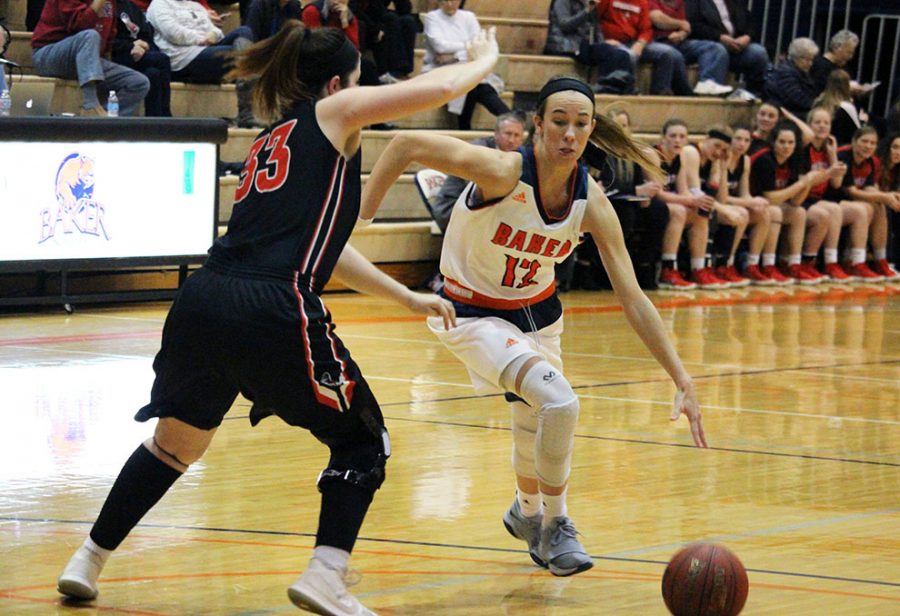 Senior Caitlin Modesett drives the ball against University of Saint Mary in the 2017 season opening game. Modesett is one of three key senior leaders on the team.

Men’s Basketball
The men’s basketball team defeated Benedictine 65-62 in the final game of the regular season. Baker finished the regular season 13-14 overall and 7-12 in the Heart of America Athletic Conference.

Senior Tyree Peter was crucial to the Wildcats’ offense as he had his 11th double-double of the season with 26 points and 11 rebounds. Sophomore Brett Elifritz came off the bench to add 14 points and nine rebounds, and junior Cornell Brown put up 12 points and had eight of the team’s 16 assists.

Before the game, the Wildcats celebrated five seniors including Nathan Guscott, Daniel Young, Tyree Peter, Russell Denney and Stephen Edwards.
Women’s Basketball
The women’s basketball team also picked up a victory in its last game of the regular season with a 79-64 win over No. 19 Benedictine. The ‘Cats finished the regular season 21-9 overall and 12-7 in the Heart of America Athletic Conference.

Junior Caitlin Modesett led Baker with 22 points and five assists. Senior Sydnie Hanson and junior Anna Hignight added 13 points each. As a team, Baker shot 44.4 percent from the field and held the Ravens to 33.3 percent.

Before the game, Baker celebrated seniors Sydnie Hanson, Jo Lira and Courtney Hoag. In the last four years, the women’s team has gone 100-33.