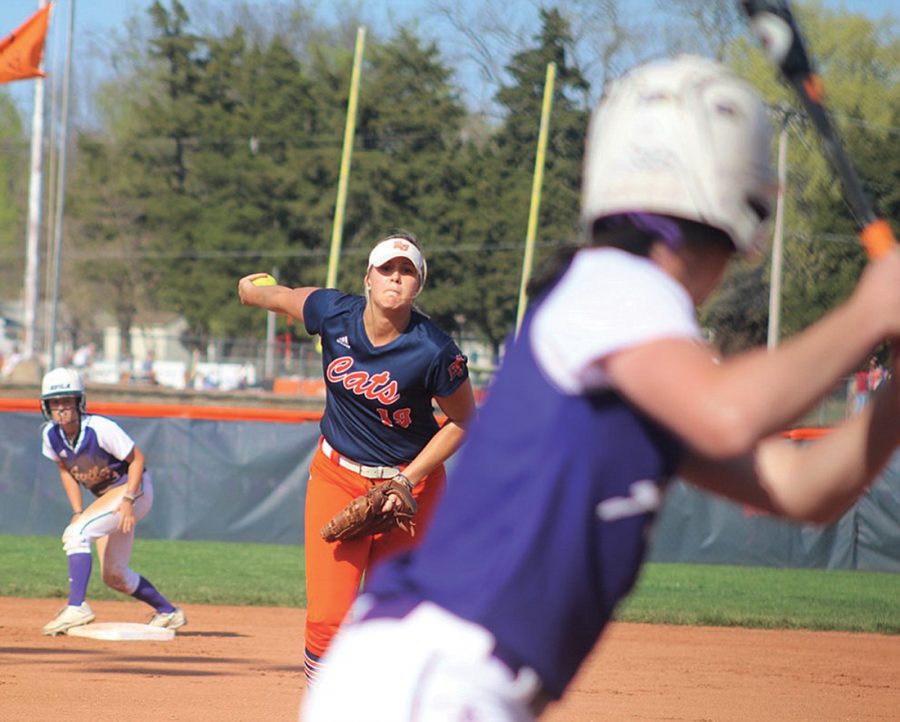 Senior Olivia Brees pitches to a Missouri Valley batter during the 2017 season. Brees opened her senior season with four wins and 37 strikeouts. Last season Brees was named an Honorable Mention All-American and set the school record with 300 strikeouts in a single season.

The first four games for Baker were at the Cowtown Classic in Fort Worth, Texas. The Wildcats won two of the games by spread in just five innings. The ‘Cats out-scored their four tournament opponents 47-10.

Tabor has been the only team to edge the Wildcats in a 2-1 game. Baker scored a run early in the top of the first on sophomore Hannah Flynn’s single that brought in junior Lydia Konrade. Tabor answered quickly with a run of its own in the same inning. Baker had seven hits in the game but was unable to convert anymore runs. Tabor scored the game-winning run in the bottom of the fourth inning on a Baker error.

Junior pitcher Olivia Brees earned the Heart of America Athletic Conference Pitcher of the Week honor for her early-season performances. Brees has earned four wins and pitched 25.2 innings. She has struck out 37 batters, allowed only nine hits and has allowed no earned runs.

In 2017, Brees was named Honorable Mention All-American. Brees finished her junior season with 300 strikeouts, setting a Baker record. She also set the school record for innings pitched with 201.1.

Offensively, the team has a 0.593 slugging percentage with 17 doubles, six triples and three homeruns. Junior Lydia Konrade leads the team with 11 hits and 11 RBIs. Konrade has hit one homerun and three doubles and triples.

Senior Steph Cardona added another six RBIs off of a homerun and three doubles.

The Wildcats look to continue the hot streak Friday and Saturday at the Friends Invitational in Wichita. Friday Baker will take on No. 13 Ottawa University and No. 1 Oklahoma City University. On Saturday Baker will play Bethany College, York College and University of St. Mary.

After the tournament, the Wildcats will play their home opener on March 10 against Missouri Valley College to open up conference play.