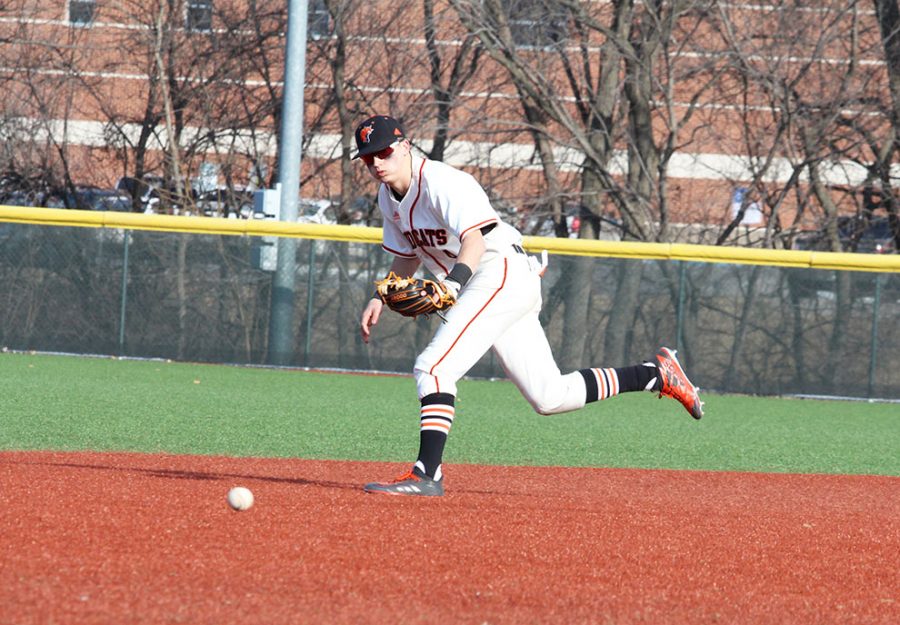 Shortstop Bailey Pattin tracks down the ball in the second inning against University of Saint Mary. Both games were played at Lawrence Free State High School. The 'Cats fell 8-10 and 5-14 in the season opening doubleheader.

The Wildcats now stand at 3-12, with the highlight so far coming in the 3-1 series win over Waldorf University.

Baker batters have 112 hits, 17 doubles, five triples and five homeruns so far this season. In comparison, the Wildcats’ opponents have totaled 139 hits, 28 doubles, one triple and nine homeruns against Baker.

Sophomore Bailey Pattin has been a consistent force for Baker’s offensive production. So far, Pattin has scored 12 runs for the Wildcats, has 19 hits and four RBIs. Pattin also has a 0.365 batting average.

On Tuesday Baker hoped to carry its momentum over into its games against Northwestern College and University of Jamestown. Baker lost to Northwestern 7-1 and 6-3 against Jamestown.

The team had another nine-game losing streak last season in the middle of March.

The Wildcats will host Manhattan Christian College for a doubleheader Saturday at Sauder Field beginning at 1 p.m. On March 10 Baker will begin taking on Heart of America Athletic Conference opponents, starting with Clarke University.