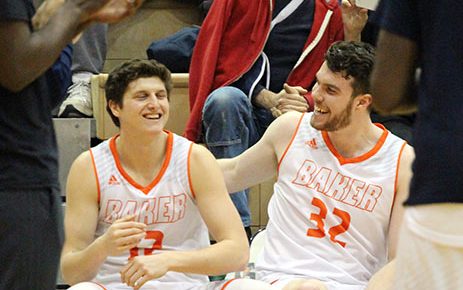 Senior Dan Young pats his teammate senior Nate Guscott on the back prior to announcing him for the starting line up. Young and Guscott are both from Australia and have played basketball at Baker together the past four years.

The men’s basketball team ended the 2017-18 season in the first round of the Heart of America Athletic Conference Tournament on Monday. The ‘Cats were seeded No. 5 entering the tournament and fell to No. 4 seeded Grand View University 76-70.

The Wildcats ended the season 13-15 overall and 7-12 in the Heart conference.

Seniors Tyree Peter and Stephen Edwards and junior Clae Martin were all named to the Heart Honorable Mention All-Conference team.

Peter finished the season with 11 double-doubles and ranked No. 8 in the NAIA in total rebounds with 258. Edwards hit 47 three-pointers this season for the ‘Cats, and Martin averaged 10 points per game this season.

In the final game for Baker, Edwards led the offensive effort against the Vikings with 15 points. Senior Nate Guscott and Peter added 13 and 12 points, respectively. Martin added another 12 points, going 4-4 from behind the arc.

Baker’s strong and widespread offensive effort did not prove to be enough to take down Grand View and move on the second round of the Heart tournament.

Baker was able to end the regular season on a high note, beating Heart-rival Benedictine on Senior Day on Feb. 24. The Wildcats downed the Ravens 65-62 in the seniors’ last-ever game in the Collins Center.

Peter was crucial to the Wildcats’ offense as he had his 11th double-double of the season with 26 points and 11 rebounds. Sophomore Brett Elifritz came off the bench to add 14 points and nine rebounds, and junior Cornell Brown put up 12 points and had eight of the team’s 16 assists.

Next season Baker will return many players who contributed to this season’s performances. Junior guard Clae Martin was in and out of the starting lineup for the ‘Cats this year. He totaled 270 points this season and ranked No. 5 in the NAIA in three-point shooting percentage with 48.6 percent.

Forwards Elifritz and sophomore Vandy Hopson also added strength to the team this season. Elifritz averaged seven points a game off the bench for the Wildcats. Hopson averaged 9.73 points per game and had a season-high 22 points in a single game over Clarke University.