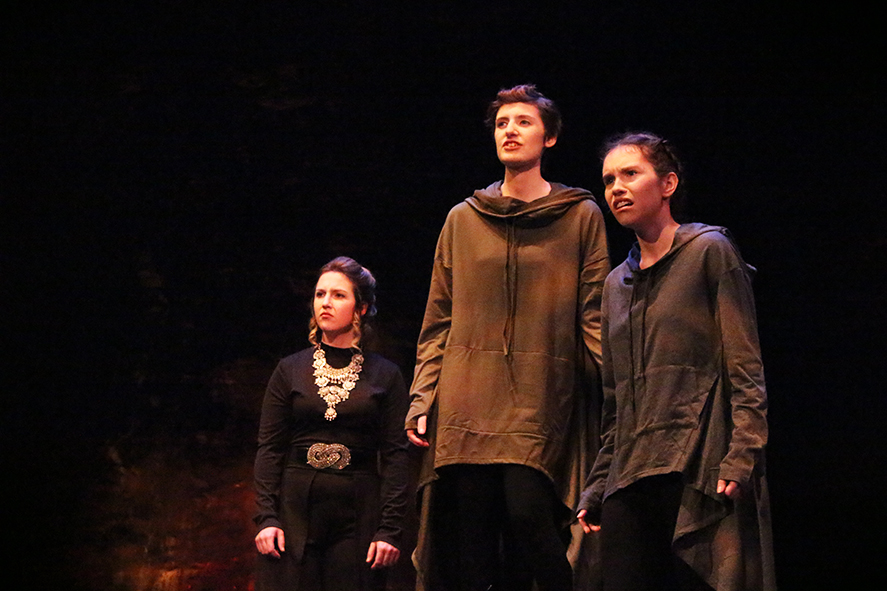 The newest play to reach Rice Auditorium is Euripides’ “The Trojan Women.” Boasting extreme amounts of woman empowerment, the Ancient Greek tragedy explains the fall of the city of Troy and all that came with it.

Associate Professor of Theatre Tom Heiman, the play’s director, chose “The Trojan Women” for many reasons, one of which was due to a news clip he saw. The clip was over how Al-Qaeda and ISIS are forcing women into slavery and telling them who they can and cannot marry. Heiman immediately thought of how these issues in the Middle East compare to the women depicted in “The Trojan Women.”

“I thought, ‘this is how these women are being treated,’” Heiman said.

Heiman explained that Baker tries to rotate play genres every few years and it had been a while since Baker had done a play on Ancient Greece. Heiman explained that the play also fit perfectly with the available actors. There are many women to choose from and a limited amount of men, making this play a perfect fit.

Sophomore Erynne Jamison was chosen for the lead role of Hecuba. This is Jamison’s fourth play at Baker, but her first time in a leading role.

“The work aspect of it is all new to me, so it is all very exciting,” Jamison said. “It’s also very nerve-racking.”

Jamison is very passionate about the message “The Trojan Women” conveys.

“I think that this show is very empowering for women. Even at the end, you’ll see how Hecuba’s strength continues and I think that is something that I really care about and I think that makes this show special in itself. I love that I get to share with the audience a message that is dear to my heart,” Jamison said.

Alongside Jamison is senior Destiny Bruno. Bruno plays the role of Andronache, Hecuba’s daughter-in-law. One of Bruno’s favorite parts of this play is the cast.

“As far as cast bonding, this is probably one of my favorites,” Bruno said. “I always like when we have a slightly larger cast. We always get really into each other.”

Auditions were held the first Monday of the spring semester and the cast has been practicing ever since. There was even a last-minute recast that brought senior Clay Sears to the group, but Heiman still kept things running smoothly.

“What was thrilling to me was we lost several days due to ice and other commitments,” Heiman said. “Usually, when you lose that kind of time so close to the show, it’s deadly. The show was actually better when we came back from where we had left it. That’s because of this cast were excited and were willing to work on it.”

Along with new strides in casting, the renovation of Rice Auditorium allowed for Heiman to utilize the new thrust stage. This type of stage allows for the audience to sit on three sides of the stage rather than just in front of it.

Freshman Hannah Brown is this year’s stage manager. Brown explained that this type of stage allowed for the cast to do more when it comes to interacting with the crowd.

“The Trojan Women” was performed on March 1 through 4.