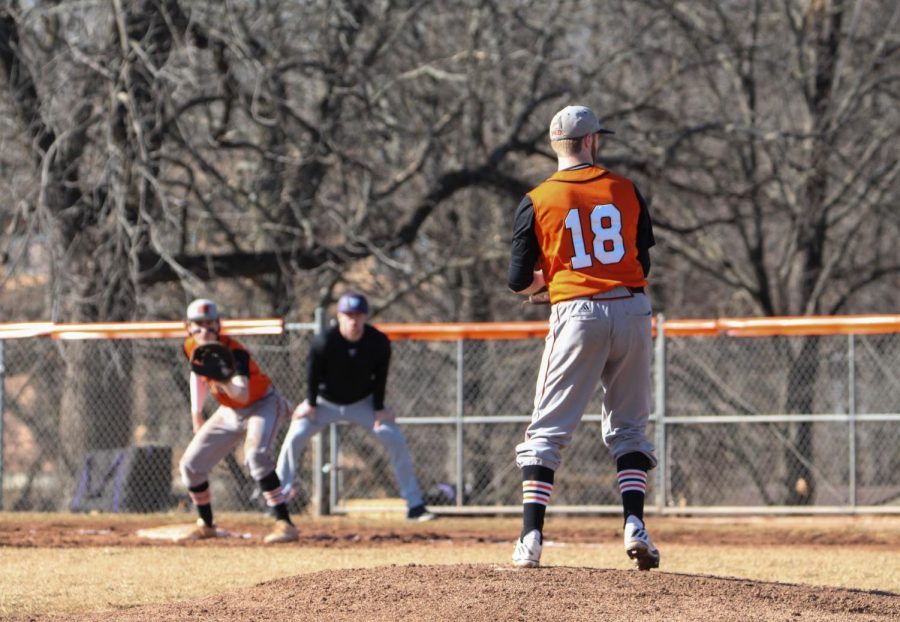 Will Edwards gets ready to pitch as a runner is held on at first base. Edwards struck out 11 batters in eight innings in the 3-0 win over Culver-Stockton College on March 18. Baker and CSC split the series.

The Baker baseball team went 3-3 over spring break playing against Mount Mercy University, Abilene Christian, Jarvis Christian College and Culver-Stockton College. Baker now sits at 8-18 overall and 2-4 in the Heart of America Athletic Conference.
vs. Mount Mercy University
The Wildcats took on Mount Mercy on March 10 in a doubleheader at Sauder Field. Baker started the break on a high note by winning the first game 5-3. The Wildcats then fell in the second game 3-2.

In the first game, Mount Mercy took an early lead in the second inning, but Baker answered with a run of its own. The Mustangs then added another two runs in the top of the fourth on an error by sophomore Kyle Klomfahs. The ‘Cats added another with a run from senir Kenny Delaquila in the bottom of the fourth, making the score 3-2, Mount Mercy. Baker tied the game in the fifth and added two more runs in the sixth to win 5-3.

Senior pitcher Austin Stendebach picked up the extra-inning win for the Wildcats.

The ‘Cats took an early lead with a run in the first inning and led until the fifth inning when Jarvis Christian tied the game. Baker then went on to score five runs in the 12th inning, winning the game 6-5.
vs. Culver-Stockton College
To close out spring break, Baker traveled to Canton, Missouri, to take on Heart opponent Culver-Stockton College. C-SC took game one 5-0, but Baker rebounded and took game two 3-0.

Offensive production for Baker was slim in the first game of the doubleheader, with Baker only getting four hits to Culver’s 11. Culver took an early lead with two runs in the first inning before adding another three in the fifth inning.

In game two, both teams remained scoreless through nine innings. Baker was able to earn three runs in the 10th to put the game away for the Wildcats. Junior Will Edwards pitched eight innings for Baker, striking out 11 batters before sophomore Ryker Johnson finished pitching the final two innings.