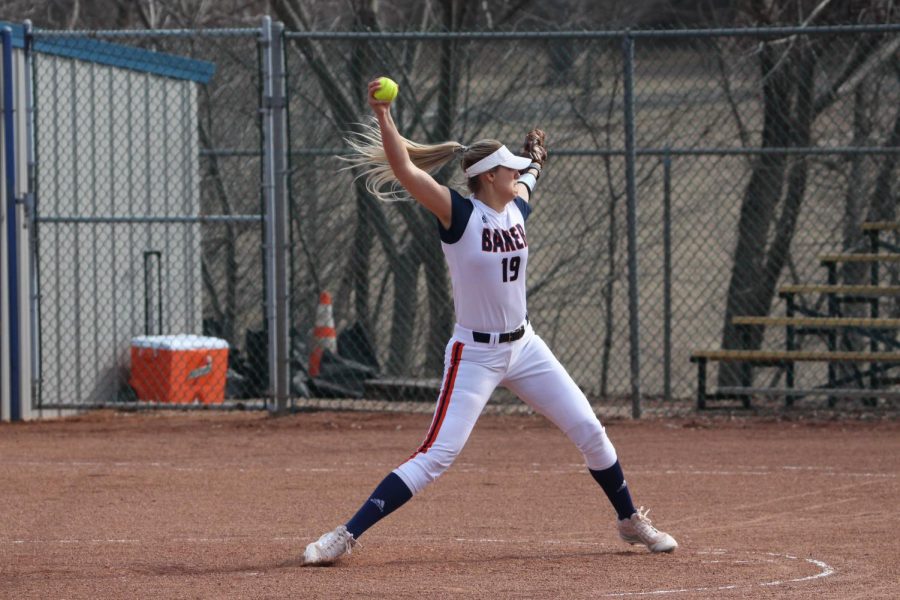 The Baker softball team ended a spring break full of games by sweeping Evangel 6-1, 9-1, and splitting a series with MidAmerica Nazarene wining 7-4 and losing 10-9 in 10 innings. Baker currently sits at 18-5 overall and 7-3 in the Heart of America Athletic Conference.
Evangel Doubleheader
In game one, junior Olivia Brees pitched the entire game for Baker, striking out nine batters. Evangel had six hits but was unable to score until finally knocking in a runner in the seventh inning. Sophomore Riley Swickard went 2-2 at bat, knocking in one run for Baker and scoring two runs of her own. Lydia Konrade and Hannah Flynn each went 2-4 with a run each. Konrade added two RBIs and Flynn added one.

In game two, the Wildcats scored seven runs late in the game, winning 9-1. Junior Rachel Wheeler went 3-3 at bat and scored two runs for the ‘Cats. Freshman Eva Gonzalez, freshman Peyon Oden and Swickard each had two RBIs. Senior Teagan Louthan pitched the first five innings for Baker, allowing just one run and earning the win.
MNU Doubleheader
Baker took game one over MNU, 7-4. Baker took an early lead with two runs in the first inning and another two in the third. Sophomore Jazzmine Thorpe went 3-4 with an RBI and two runs for the ‘Cats. Flynn added two more RBIs as she went 2-4 and scored another run for Baker.

The Pioneers scored three runs in the fifth inning off of multiple Baker errors. The Wildcats scored two more in the sixth inning before MNU ended the game on a Christina Gochenour homerun.

Brees pitched the entire game for the ‘Cats, striking out 13 MNU batters.

Game two of the doubleheader was back and forth for MNU and Baker but ended in the 10th inning when MNU scored two runs, one of which was off a Wildcat error. Baker ended the game with three errors.

Offensively, Konrade led Baker with four RBIs, including a three-run homerun in the second inning.

Three Baker pitchers took to the mound in game two including senior Alexis Korte, Louthan and Brees. Brees recorded the loss but added six more strike outs to her season total of 110.

The Wildcats will now host Heart opponent Grand View for a doubleheader at 1 p.m. on Saturday at Cavaness Field.