Trump’s comments cause for concern 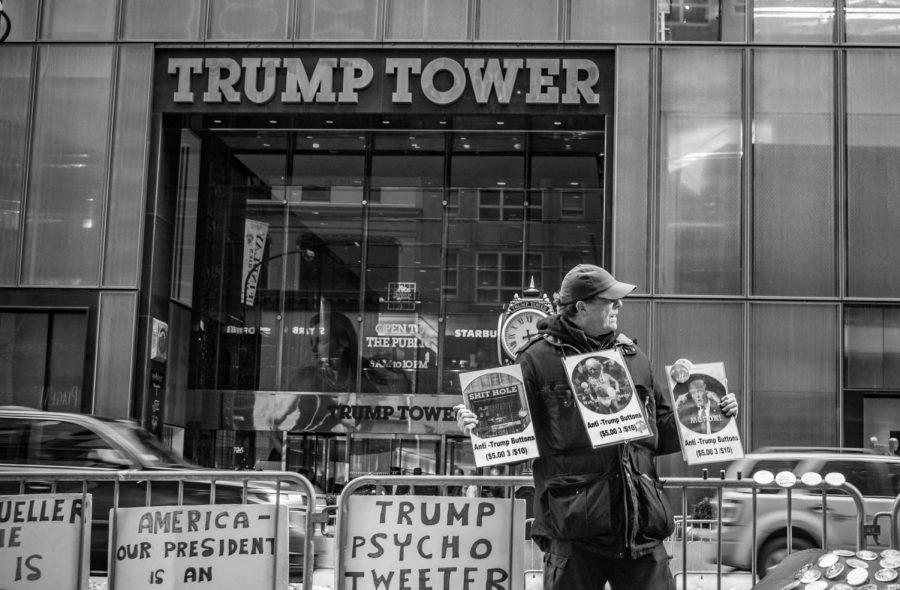 A man protests across the street from Trump Tower on March 8. Despite the dreary weather, the man stood there for awhile and held three signs while other signs and buttons were scattered around him. All of the signs condemned Trump or insulted him in some way. Several passerby's would stop and take photos in front of the Tower, most of the time to either flip off the building or do something equally as negative to express their feelings about the current president.

A little over a year ago, President Donald Trump was sworn into office, and ever since then, America has been bombarded by one tumultuous statement after another, both from his mouth or his Twitter.

While these statements create a hostile political environment, the sheer volume and subject matter of these divisive comments serve to “muddy the water” of legislative agendas and normalize the Trump presidency.

Washington Post writer James Hohmann voiced similar concerns in a piece concerning the remarks Trump made about the Democrat’s behavior during his State of the Union Address earlier this year. To those following the happenings of the Trump administration, you may keenly remember when the president suggested it was “treasonous” for the Democrats to not clap during parts of his speech.

Hohmann illustrated the consequences of thoughtless statements said by President Trump by arguing the threat to the American people’s faith in the democratic system and the dilution of the power of words. While both are serious and fundamental threats to any semblance of a civilized government we may have left, the reckless comments also serve another purpose most are not aware of: the distraction to the real issues coming out of the White House.

While most are caught up in the soap opera that is the rumors pouring out of Trump’s West Wing, each one becoming more spectacular than the last, the real threats ideological opponents of Trump should be paying attention to go unnoticed.

For instance, a provision in the celebrated tax reform bill allowing oil drilling in the Alaskan wilderness passed with less fanfare than the average Trump tweet. This system of being in-tuned with the trivial day to day takes focus from the long-term sustainability of our country.

In addition to distracting people from getting legislation passed, these statements also serve to desensitize the American people to the vicious rhetoric coming from the Trump administration. During President Trump’s campaign, he insulted a disabled reporter, and while in office he did not directly condemn the Neo-Nazi’s in Charlottesville.

Honestly, only a few people stopped to think of the implication these actions have on the scape of public opinion. Most were not surprised in the slightest.

We need to combat this trend by not focusing on the latest tweet but by examining the hard policy proposals and think of the implications Trump’s public statements will have on America in the years to come.