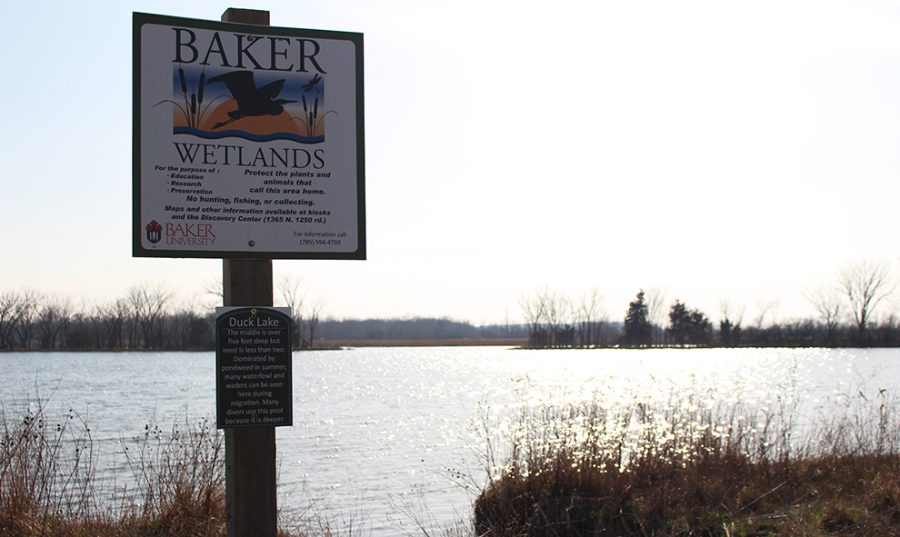 The Baker Wetlands is one of the remarkable natural spots found in Kansas. In just a short visit, I was able to see the diverse natural beauty this nature preservation landmark has to offer. A flock of birds resting in one of the swales which I’m fairly sure were Franklin Gulls, based on a brochure, birds perched on the birdhouses and rabbits running in the thicket off the trail.

The 11 miles of trails and large amounts of wildlife attract many people, including walkers, photographers and bird watchers.

Baker University acquired the original 573 acres of land from the U.S. Department of Health, Education and Welfare in 1968. The size of the Baker Wetlands increased to 927 acres when the Kansas Department of Transportation purchased additional land to add to the Wetlands as a resolution to the 56 acres they needed to build the South Lawrence Trafficway.

The additional 410 acres purchased by KDOT was then extensively restored to add this land to the existing Wetlands by Baker University. This included building pools and swales to retain water, seeding the new land and creating methods of water control.

The restoration project was led by Roger Boyd, the current senior scientist at the Wetlands and professor emeritus of biology.

So far, 278 species of birds, 98 other vertebrate species and 487 plant species have been identified at the Baker Wetlands.

Meier is a photographer who won the National Juried Art Show at the Baker Wetlands in 2017. The sculpture is made from willow trees that will grow into the circular shape they were planted and intertwined in. The sculpture can be seen at the Wetlands in Tract B along the Diagonal Trail.