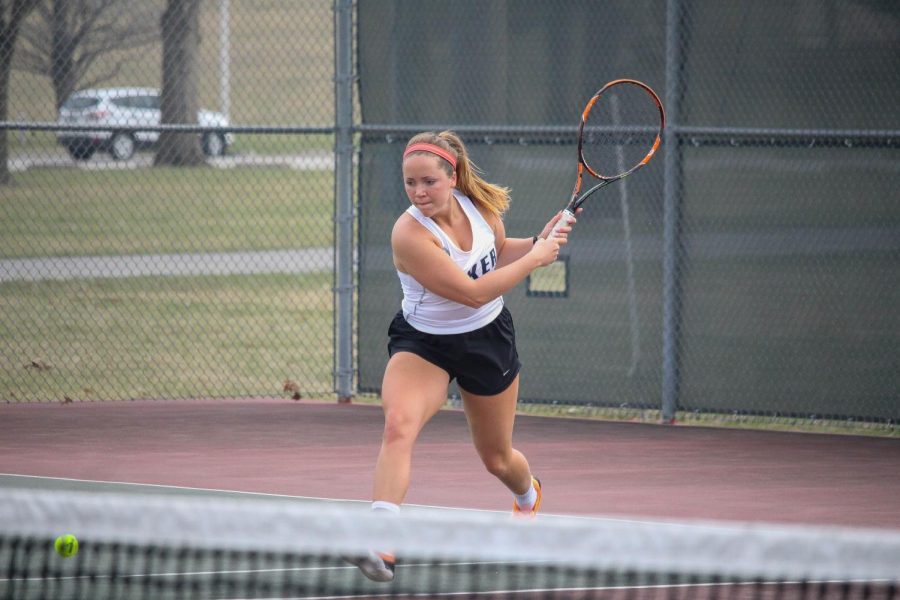 Senior Holly Chestnut lunges for a ball in her match at Ottawa University.

At the halfway point in the season, the women’s tennis team now sits at 6-2 after defeating College of Saint Mary 6-3 on March 24.

The women’s team took two of the three doubles matches over Saint Mary. The first win came from Kate Taylor-Doran and Sophie Robertson, winning 8-2 in the top doubles slot. The No. 2 doubles team of senior Holly Chestnut and freshman Kayelee Smith defeated Allyah Rayyan and Adriana Olague 9-8 in a 7-3 tiebreaker. The No. 3 Baker doubles team of junior Morgan Francis and sophomore Shelby Gudenkauf fell 8-4.

The halfway point of the season finds the men’s team at 4-3 overall. On March 23, the men’s team fell to Ottawa 8-1 with the sole Baker win coming from No. 5 singles player Carson Fitzgerald over Alejandro Romero. Fitzgerald took the first set 6-3 but lost the second set 6-4 before winning the tiebreaker 10-5.

Both the women’s and men’s teams will travel to Winfield to take on Southwestern College on Saturday.