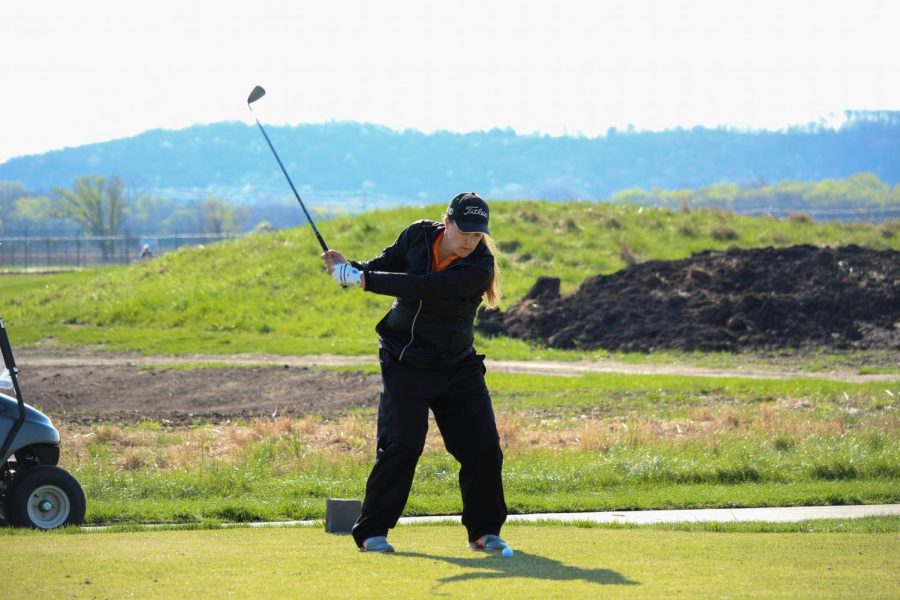 Junior Annie Raybourn keeps her eye focused on the ball during her backswing. Raybourn tied for ninth at the Graceland Spring Invitational.

The women’s golf team brought home first place in the first tournament of the season at the Graceland Spring Invitational on March 24. Baker finished with 733 team points, ahead of second place Waldorf University by just two points.

Junior Samantha Mitchell took first place out of 31 golfers individually with rounds of 89 and 80 for an overall score of 169. The win also earned Mitchell the Heart of America Athletic Conference Women’s Golfer of the Week honor. Mitchell had to work against the weather during the tournament as the first day saw 40 mph winds and the second day was rainy.

“The weather was super trying, as it usually is at this tournament,” Mitchell said. “So, it was great to endure that and still have a team score to win as well as win individually.”

Mitchell improved her score from the first round by nine strokes, but she believes she has room for improvement.

“My individual goals are to improve on my short game and putting, so (assistant coach) Andy (Kelley) and I have been working on getting better on that aspect,” Mitchell said.

Like Mitchell, her teammates can also improve throughout the season.

“Everyone on the team would tell you they could have played better than they did, and so we know we have room to improve and we will try to get that done during practice and eventually tournaments,” Mitchell said.

On the men’s side of the Graceland Spring Invitational, Baker finished fifth out of 12 teams with total score of 635. Senior Riley Kemmer took third individually with rounds of 74 and 76 for an overall score of 150, just four strokes behind the winner.