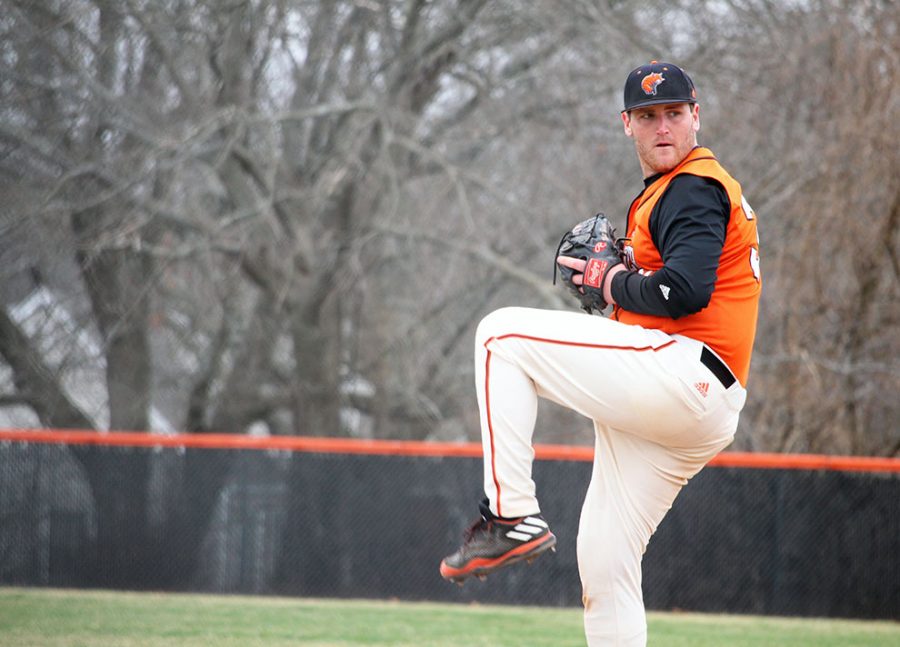 Matt Stuart eyes the catcher's gloves in preparation to throw a pitch. Stuart pitched a shut out in the sixth and seventh innings of the third game against Evangel at Sauder Field on March 24.

The Baker baseball team lost all four games in the series with Central Methodist over the weekend. The Wildcats are now 18-30 overall and 9-18 in the Heart of America Athletic Conference.

Baker took another quick lead in game two with Andrew Reich picking up an RBI in the second. Central Methodist answered in the third with Jared Johnson advancing on the throw and stealing a base to score.

The Wildcats picked up two more runs in the fifth, only to be matched by the Eagles, keeping a 3-3 tie. The Eagles ended the game with a two-run home run in the seventh, taking game two 5-3. Central Methodist’s Kyle Fulton pitched the entire game for the Eagles, striking out 12 Baker batters.

The final game of the series was very slow for the Wildcats. The ‘Cats only managed to get three hits off of Central Methodist’s pitcher Randy Perez, who struck out nine batters. The Eagles, on the other hand, scored eight runs on eight hits to win 8-0.

Next up the Wildcats will host Park University on Tuesday at Sauder Field for a single game. The ‘Cats took on Park earlier in the season and fell in a close 10-9 game.