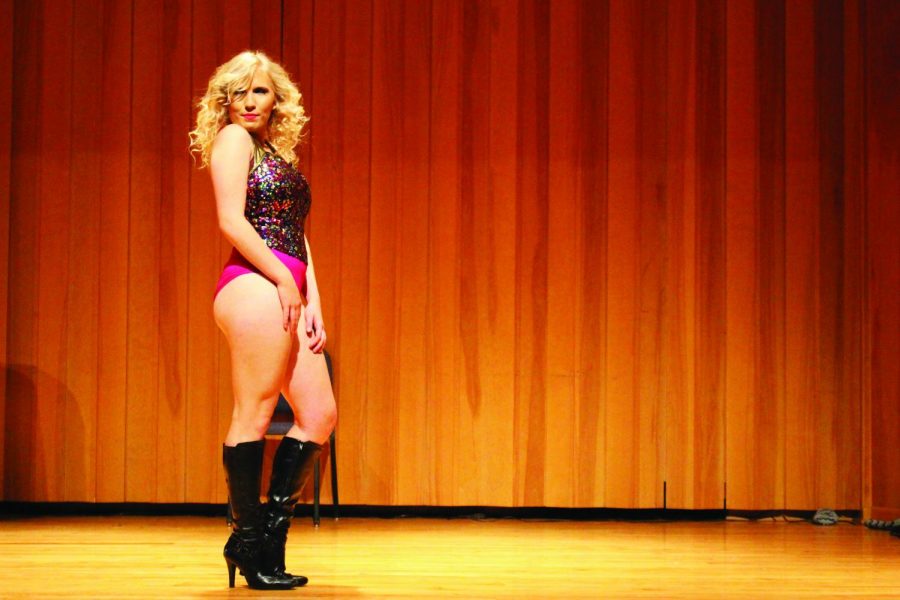 Freshman Erin Laney performs as a bio-queen in the first act of the night.

The month of April has unofficially become the month that college students celebrating Pride across the country often refer to as the month of ‘Gaypril.’ The Total Equality Alliance, (TEA) hosted a drag show for the first time on campus, along with other events throughout the week to promote Pride.

The drag show was on April 28 in McKibbin Recital Hall where five students performed in their drag.

Since becoming an adviser, Pumphrey has attended three or four drag shows before his student’s show.

Additionally, Smith, TEA president, said that they wanted to make this an annual event on campus as Baker has never hosted anything like this before. Haskell Indian Nations University hosted its own drag show, inspiring Smith.

“[This drag show] to me is important because I want [it] to always be the thing to round off any kind of Pride stuff we do during April,” Smith said.

The drag show was the final event of the week, to end with a bang, that occurred to promote Pride on campus.

When most people think of drag the first thing they think of is a drag queen. Godwin was the only male performer to identify as a drag queen at the performance.

“They needed more queens, they had plenty of bio-queens and drag kings,” Godwin said.

This is the first time he has performed in any type of drag. Godwin performed to “Gunpowder and Lead” by Miranda Lambert.

When explaining bio-queens in drag culture Smith said “[a] bio-queen is a subsection of a drag queen because they are still technically drag queens.”

“A drag queen… is more of taking on femininity and multiplying [that] by ten,” Smith said.

A drag king is pretty much the exact opposite; they take some kind of facet of masculinity and turn it into a way different persona.

According to Smith, a self-proclaimed drag king, there are two different types of kings that make up the drag world: handsome and mischievous or a ‘f**kboy’.

And everything in between

Freshman Erin Laney performed as a bio-queen at the show. A bio-queen is when a woman dresses up as a man pretending to be a woman in drag culture. Laney also mentioned that when performing it is important to feel like a “boss babe” up on stage.

When asked about getting ready for a show Laney and the majority of the performers all think that contouring is the most important aspect of transforming into a drag performer.

“I’m supposed to make myself look like a male dressing up as a female and I think that’s kind of hard. I think it’s probably taken me a good two and half hours to get ready tonight,” Laney said.

Pumphrey mentioned that the show, “was awesome because we weren’t expecting as many people, I think, we weren’t probably expecting the reaction.”

In the coming years, Smith and the group hope to continue hosting events on Baker’s campus to promote Pride during ‘Gaypril.’

“[The event was] to bring solidarity between the different organizations on different campuses and just to partially bring a bit of gay culture that people know in a less of Ru Paul fashion,” Smith said.