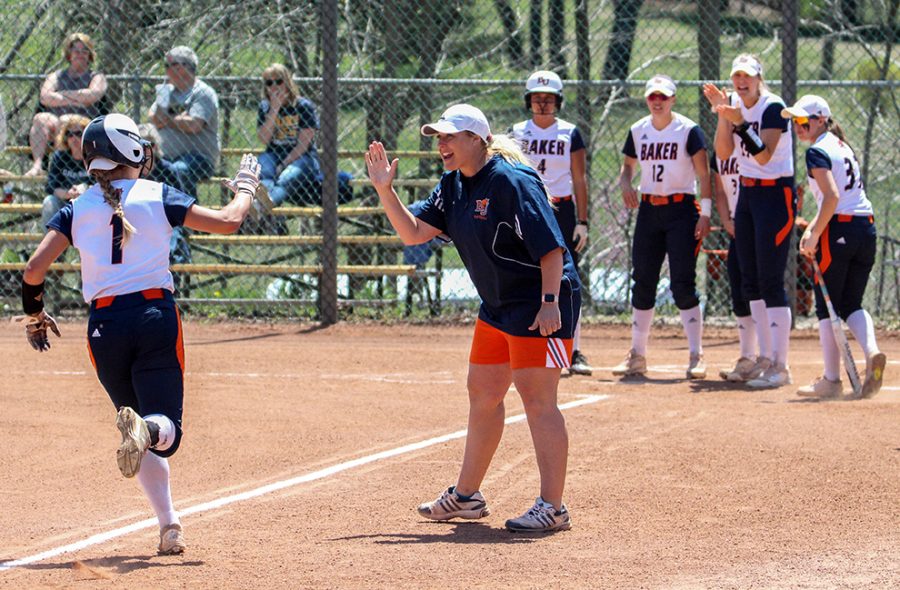 Center fielder Riley Swickard high fives head coach Jamie Stanclift as her teammates wait to celebrate after a home run. The Wildcats went on to win 13-0 over Clarke University.

The Wildcats surpassed 31 wins to become the winningest team in Baker history on April 26. The 2011 team’s 31-21 record stood as the benchmark season until the ‘Cats improved to 38-12 and counting.

“We follow GRIT (Grind for growth, Resiliency, Intensity and Teamwork) and have kept it as a theme throughout the season,” Cardona said.

The Wildcats entered the Heart of America Athletic Conference tournament as the No. 3 seed behind No. 1 Grand View University and No. 2 Central Methodist University.

The ‘Cats faced No. 6 Mount Mercy in Springfield, Missouri on Wednesday and emerged with a 1-0 victory.

Junior Olivia Brees completed another impressive game, allowing three hits, nine strikeouts and no walks. Brees leads the nation in strikeouts and has accumulated six Heart Pitcher of the Week honors this season. Brees said she tried to improve on the mental aspect of her game this season.

“I have strived to become the calm, cool and collected leader that my team needs in tough or high anxiety situations,” Brees said.

The Wildcats collected three hits from junior Lydia Konrade, freshman Briele Rees and junior Rachel Wheeler. Rees’ hit was in the bottom of the second inning and scored sophomore Hannah Flynn for the ‘Cats to maintain the 1-0 lead.

Cardona thinks the team has a very good chance of going far in the Heart tournament.

“I have no doubt that we can come out as conference champs,” Cardona said.