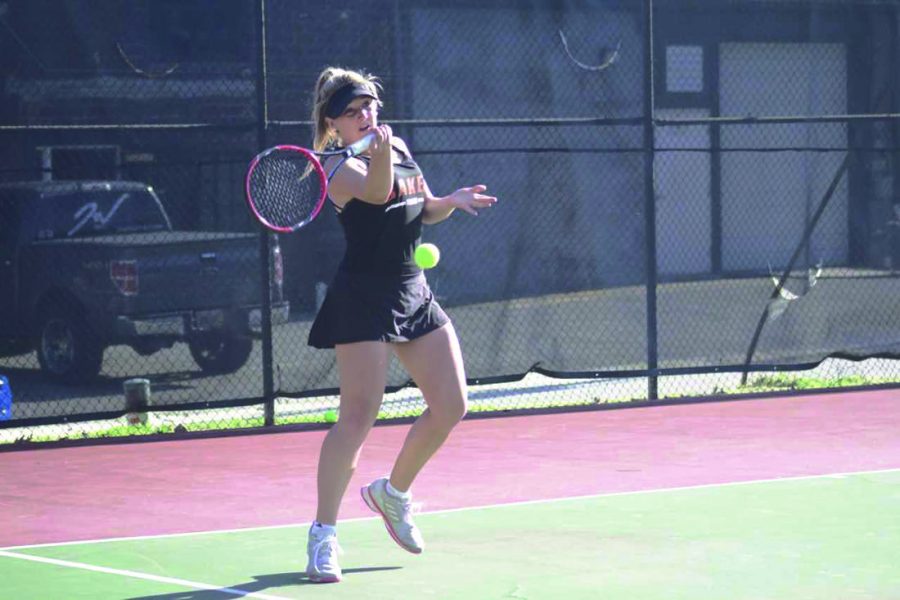 Freshman Janie King hits a forehand back to her Missouri Valley opponent in Baker’s last home match of the season. The team fell to MVC 7-2.

The men’s and women’s tennis teams both ended the spring season at the conference tournament. The teams traveled to Webster Groves, Missouri, to compete in the Unaffiliated Grouping Conference Tournament, which included teams from the Heart of America Athletic Conference as well as the American Midwest Conference.

The No. 4 seeded women’s team took down No. 5 seeded Grand View in the first round. Baker won 5-1, picking up wins at No. 2 and 3 doubles from junior Sophie Robertson and senior Holly Chestnut as well as freshman Kayelee Smith and junior Morgan Francis. Robertson, Smith and Francis each picked up singles wins for Baker at No. 4, 5 and 6, respectively.

Smith said she and her teammates gained confidence from the first match and were going into the second round with a “nothing-to-lose attitude.”

The win brought the Wildcats to the semifinals, where they fell to No. 1 William Woods 5-0. William Woods then went on to win the tournament.

“William Woods is extremely talented, so we decided to take on the match with an open-minded and aggressive approach,” Chestnut said. “Although we did not win our doubles matches, every singles match was very competitive.

On the men’s side, the No. 5 seeded Wildcats fell in their first match against No. 4 Missouri Baptist 5-2. The ‘Cats were able to pick up wins at No. 3 doubles from freshman Gabriel Marques and junior Elliott Wiskirchen and No. 2 singles from senior Thomas Irick.

The teams will graduate several seniors this year, including Chestnut, who contributed to the team all four years of her career.

“It didn’t hit me that my collegiate tennis career was over until the last point of my singles match,” Chestnut said. “It was a very sentimental moment because of how much tennis has impacted me throughout college.”

As a new member of the team, Smith played a strong role in the top six and hopes to advance next season.

“We will have a whole new team, so I want our team to mesh really well and support each other to get as many wins as possible,” Smith said. “I want to move up in the rankings on the team and continue to win important matches for the team.”