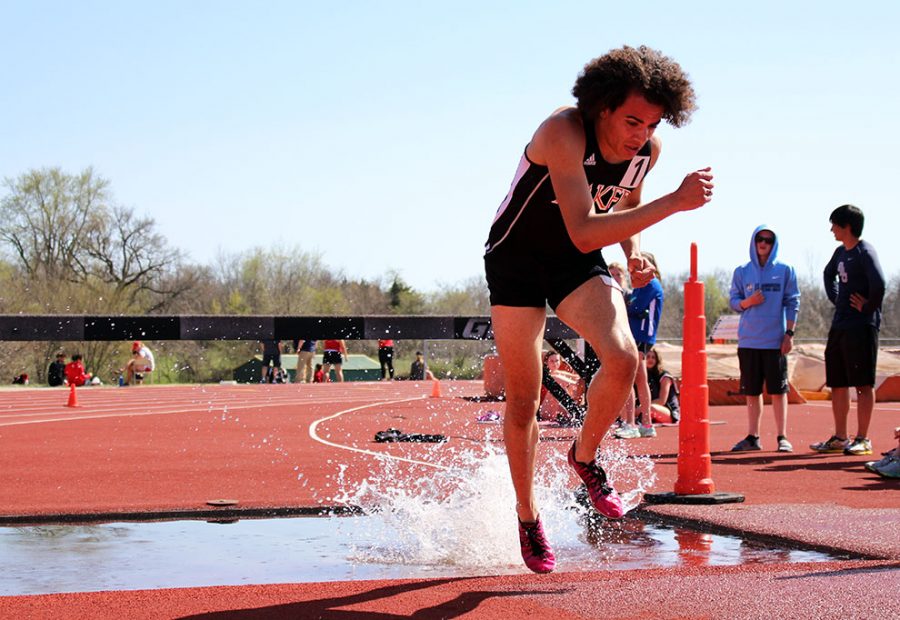 After jumping over the steeple barrier, junior Jessica Watson lands into the water pit during the 3,000 meter steeplechase at the Zach Kindler Wildcat Open on April 28. Watson captured a win in both the steeplechase and the 5,000 meter racewalk.

The men’s and women’s track teams hosted the Zach Kindler Wildcat Open on Saturday at Liston Stadium in honor of former head track and field and cross country coach Zach Kindler, who died in 2014.

Peoples tossed the hammer 50.58 meters to claim first as well as a trip to nationals. Mares hit the A Standard mark in the women’s 200 meter dash with a time of 24.64 seconds. Mares was also apart of the qualifying 4×100 meter squad with senior Taiylor Sharp, sophomore Myan Elrington and sophomore Erica Esch.

McCollum improved her time by over a minute and is ranked third within the NAIA for the 5,000 meter race-walk. This will be McCollum’s fourth year participating in the national meet.

Winsor hit the mark of 59.48 meters in javelin early in the season at Emporia State on March 17. Winsor felt the pressure of making it to the national meet was lifted off his shoulders by reaching the mark at the first meet of the season.

Remaining athletes have two more meets with hopes of competing on the national stage. Up next for both team’s is the Heart of America Athletic Conference meet in Liston Stadium on Friday and Saturday and the Sam Williams Twilight Qualifier in Emporia on May 12.

Returning 2017 Conference champions include McCollum in the 5,000 meter race-walk and the women’s 4×100 meter relay team.

The women finished seventh in the 2017 outdoor Heart conference meet and the men claimed fourth. Grand View University and MidAmerica Nazarene look to defend their women’s and men’s titles, respectively.