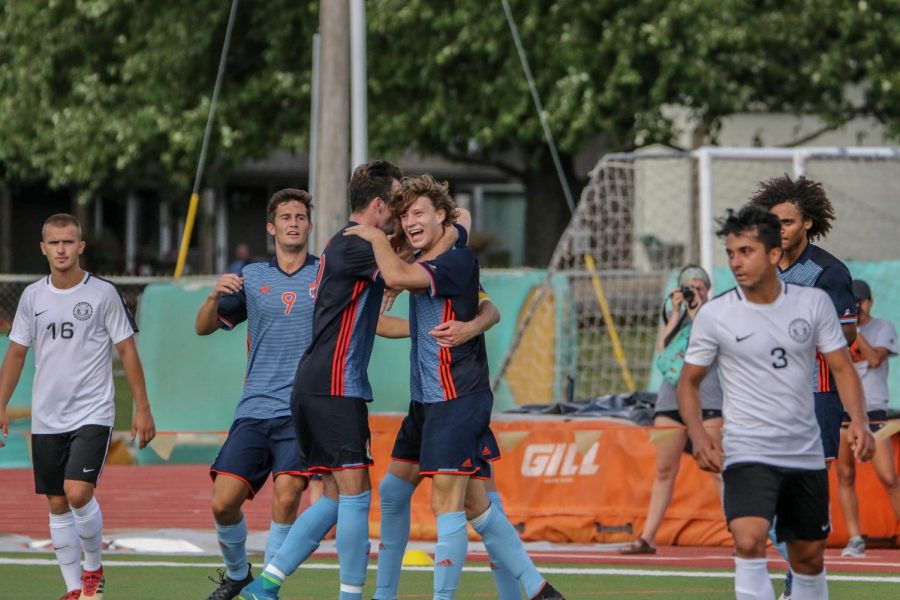 Freshman Lucas Jacobs celebrates with his teammates after scoring a goal against the University of Northwestern Ohio. Jacobs would finish the game with the two goals in the Wildcats win.

Not all freshmen athletes are lucky enough to start their collegiate careers with multiple game-winning goals, beating nationally ranked teams and Heart of America Athletic Conference Offensive Player of the Week honors but for freshman midfielder Lucas Jacobs this is a reality.

The Breda, Netherlands native came to Baker University this fall after competing with Breda, Netherlands professional soccer club, NAC Breda. Jacobs also played in the JEKA championship, where he scored three of the four goals and added one assist. Jacobs describes his last soccer match in the Netherlands as a “good goodbye” before beginning his career at Baker. This high level of soccer gave Jacobs the experience needed to be competitive at the NAIA level.

The standout freshman leads the No. 2 Wildcats with seven goals and is No. 4 within the NAIA on goals scored. His first game as a Baker Wildcat was against Kansas Christian College where he contributed two out of the 10 goals for the 10-0 win. Jacobs had a standout performance against No. 13 Vanguard California as he lined up a game-winning goal in the 83rd minute to give Baker the 2-1 win. This was followed by yet another game-winner against No. 8 Georgia Gwinnett. Jacobs was able to score in the 90th minute after an assist from senior Austin Halsey. This hot start to his debut season is what earned Jacobs the Heart Offensive Player of the Week title.

Jacobs also excelled during the Labor Day Classic where the ‘Cats faced two nationally ranked teams, No. 3 Oklahoma Wesleyan and No. 25 University of Northwestern Ohio. Jacobs tied the match against Oklahoma Wesleyan 1-1 right before halftime. Senior Steeve Pouna secured the win with a second half goal for the ‘Cats to get the upset victory. The ‘Cats took on University of Northwestern Ohio next where the match remained scoreless for the first 72 minutes until Jacobs scored. This was shortly followed by another goal from Jacobs in the 84th minute to clinch the 2-0 victory.

The acclimation to American soccer has shown minimal challenges for Jacobs. The biggest adjustment has been the combination of soccer and academics. After finishing high school in the Netherlands, Jacobs decided to focus on soccer. The freshman business major likes Baldwin City and plans to stay a Wildcat unless an offer to play at a higher level becomes available.

Jacobs and the ‘Cats are set to begin Heart play against No. 7 Missouri Valley College on Sept. 18 at Liston Stadium. The No.2 ranked Wildcats look to chase after a Heart title and another national tournament appearance.